To say the Cayenne Turbo S E-Hybrid (starting at $161,900) is quick for an SUV is an understatement. Its 4.0-liter twin-turbo V8 is joined by a 100 kW electric motor. The combined output is 670 horsepower and 663-pound-feet of torque. The result is a zero to 60 time of 3.6 seconds. Stomping on the accelerator, whether from a dead stop or while passing slower traffic, resulted in a burst of speed you don’t typically feel from an SUV.

In fact, it’s one of two new hybrids. The second being the Cayenne Turbo S E-Hybrid Coupe which is just the coupe version of the SUV with a sloping rear end.

The combination of hybrid and gas engine powertrains here is nearly flawless. Other than a change in noise, there’s no discernable dip or bump in power. It’s just a smooth line of acceleration. On highways and on backroads it’s a solid tourer that’s ready to embarrass folks in sports cars unaware of the powerplant you’re hiding underneath the hood.

Porsche noted that, like the hybrid version of the Panamera, the addition of the electric motor isn’t an economic play (the V8 might have tipped us off to that). That EV torque coupled with the twin-turbo are all about giving the vehicle the boost to get to that sub-four second zero to 60 time.

But, there are other advantages. If your neighbors aren’t a fan of the growl of a V8, the Cayenne Turbo S E-Hybrid has a quiet mode so you can creep out of your cul-de-sac. Porsche is still waiting for the EPA to test its EV-only range, but during my drive, the system seemed to be capable of low to mid 20s in range and I’m guessing in the real world you’ll probably get closer to 18-19 miles. Enough for some commutes or jaunts around town. Sure you’re driving a V8 that can roast most vehicles on the road, but sometimes, you wanna chill. You know, for the Earth.

The bummer is that around town, the Cayenne Turbo S E-Hybrid feels like a husky on a leash. It wants to run wild in the mountains and you’re forcing it to walk to Piggly Wiggly. The cool (and standard) Porsche Ceramic Composite Brakes (PCCB) are a bit too powerful for driving around town. They have unbelievable braking power on the open road. Pulling up to a parking lot ticket dispenser can be a bit of a challenge the first few times you do it.

The steering and suspension are also outstanding around tight corners. Again, Porsche has done a magnificent job making an SUV corner like a car and the Cayenne is one of the best handling (if not the best) SUVs on the market. In town though, the steering is a bit twitchy. Fortunately, dynamic chassis control is standard on the vehicle so no matter what the environment, the Cayenne matches the ride for the driver and passenger. 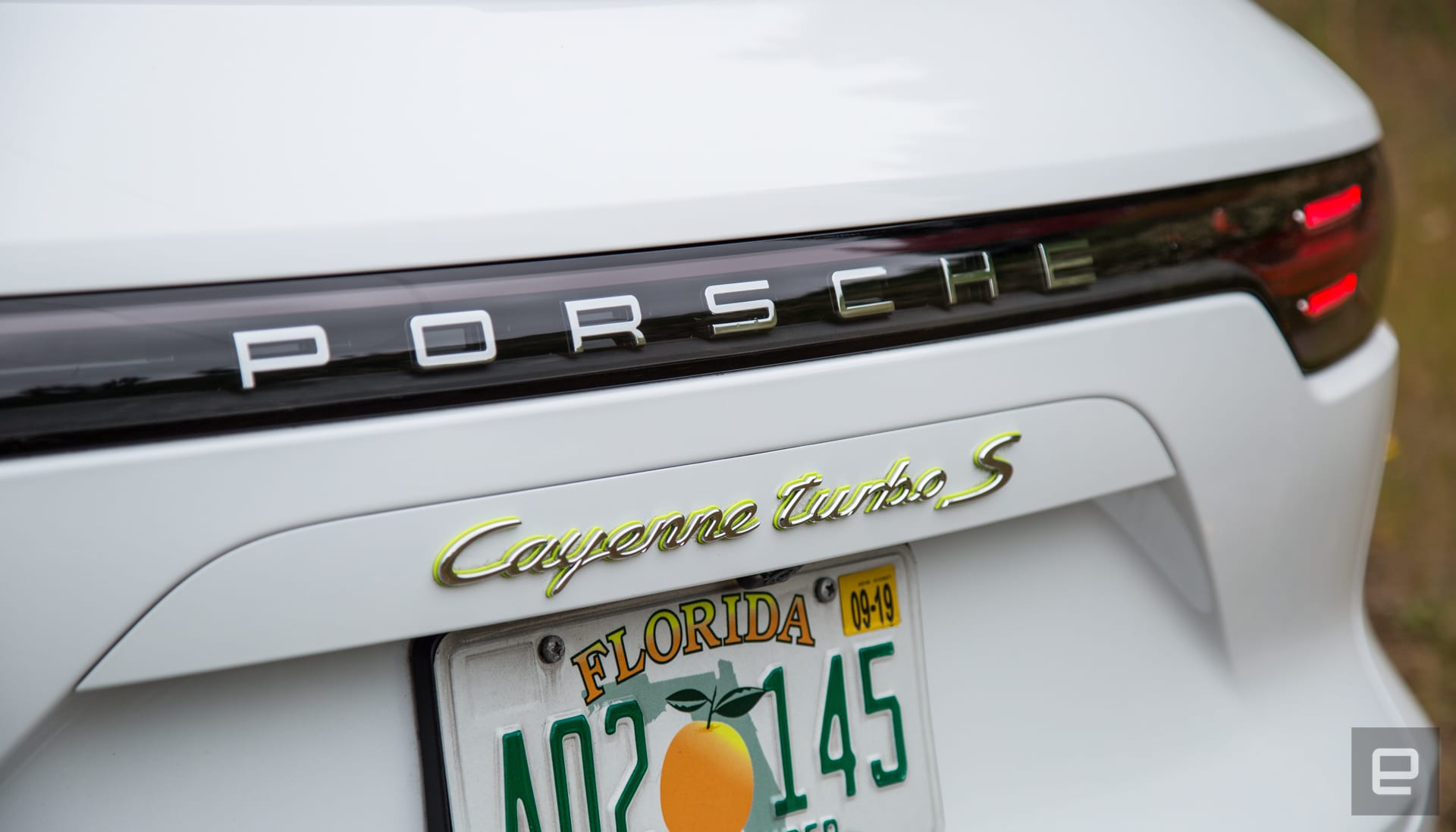 The thing is, these slights about twitchy steering and aggressive brakes against the SUV are really the attributes of a sports car. Do most people need ceramic composite brakes? Of course not, but the people that will buy the incredibly quick Cayenne Turbo S E-Hybrid want them. If you’re putting that much power in a car, it needs to be able to stop and aggressive steering is just part of that package. This Cayenne is using the boost technology of the 918 Spyder. If that’s not enough to remind you that you’re driving a Porsche, I don’t know what is.

But inside, it’s still the same comfortable Cayenne. The seats are worthy of a road trip, you can also get adjustable Sports or Comfort seats. I’m partial to sports seats in general, but if this is going to be a commuter vehicle, maybe opt for the comfier of the two. The rear seats are also comfortable with plenty of room for adults. With those seats in the back folded down, the Cayenne Turbo S E-Hybrid has 56.6 cubic feet of storage — plenty enough for trips to the grocery store.

The rest of the interior is well appointed. It’s a sports car, with luxury leanings. The infotainment system is lag-free with an easy to navigate UI. In addition to onscreen elements, Porsche has added hardware buttons below the touchscreen near the shifter to help jump to the most used features like navigation and media. Plus, the Infotainment system’s customizable grid layout makes for quick access to the items you use most.

Also near the shifter are most of the vehicle’s hardware buttons for adjusting items like suspension and climate control. While I generally like this layout, the black-glass material makes it easy to see what options you didn’t add to your car because they’re visible under the surface which may lead to post-purchase FOMO. 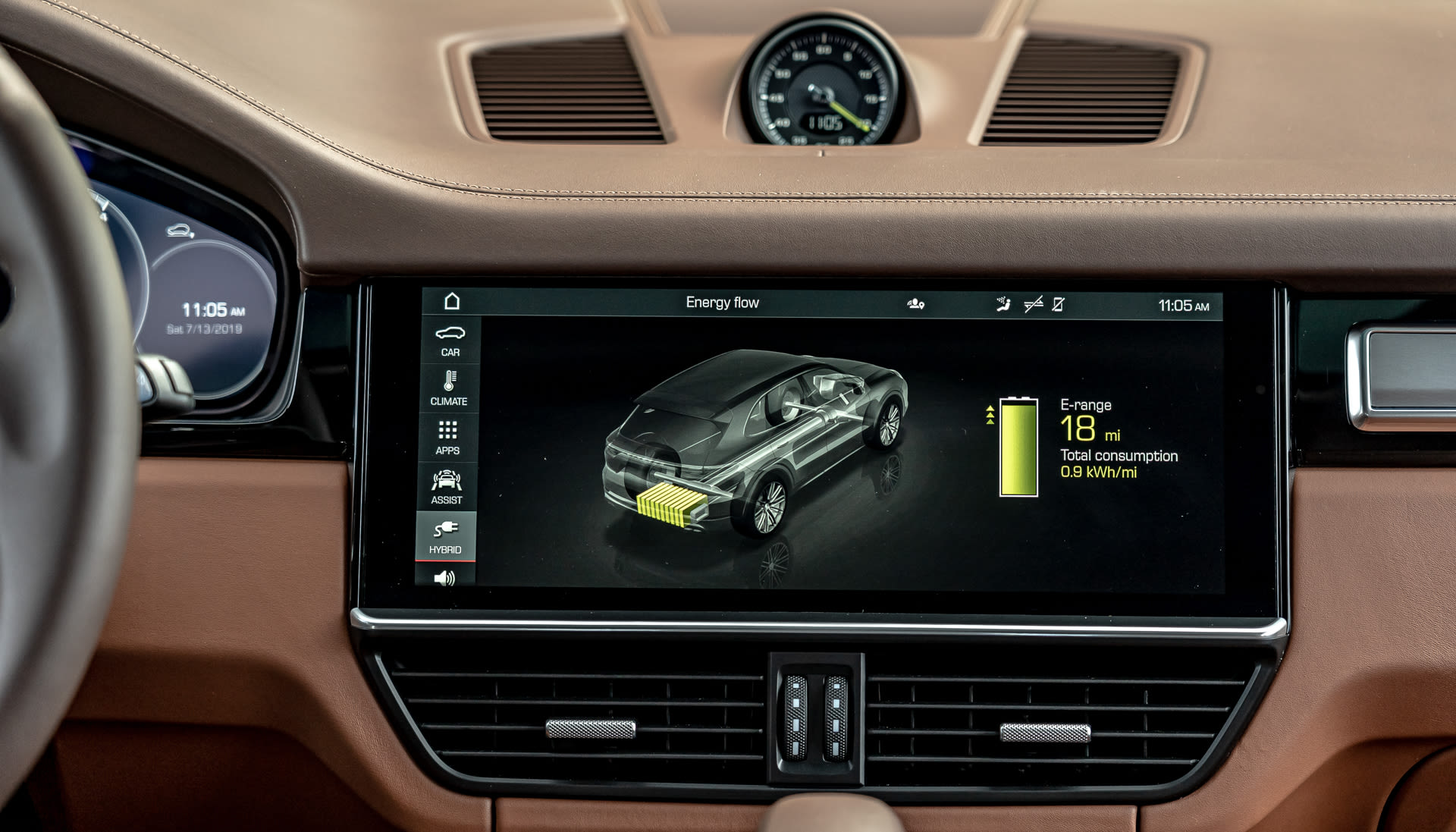 One item you should splurge for is the adaptive cruise control as it supports stop and start functionality. Essentially, if the vehicle in front of you comes to a complete stop, as long as it moves again within three seconds, the Cayenne will continue following it. It’s great for commuters that deal with a lot of gridlock.

The lane-keep assist feature is nearly on par with offerings from Mercedes and BMW. It handles straights and shallow curves no problem. Sharper curves can sometimes require a bit more help. Wrestling the steering back from the system requires very little torque from the driver which is ideal.

Overall, the Porsche Cayenne Turbo S E-Hybrid (the automaker does love its long names) is an outstanding sports car that just happens to be a hybrid SUV. It’s quick, handles marvelously and has more than enough braking power to make that speed manageable. It’s a fast car that seats more than two people and can haul groceries. As long as you can get used to all that sporty goodness while driving through town and premium price tag, it’s worthy of the name Porsche.