The Polestar 1 is a beautiful ode to driving

While the new company’s first vehicle — the $155,000 hybrid Polestar 1 — might not look the supercar part, it’s targeting a more sophisticated driver that wants to spend a lot of money and have something that’s in limited supply. It’s also the last hybrid to be released from the new automaker. Going forward, all Polestar vehicles will be EVs.

But this exquisite-looking vehicle is more than just a pretty face. I recently had a chance to drive it around the Bay Area for the day and came away impressed, not just by how well it looks in person but also its prowess on both winding backroads and the highway.

At the heart of the vehicle are three power plants. A super and turbo-charged 2-liter four-cylinder engine runs the front wheels, while two electric motors control the rear. Added up, it equals a combined power output of 619 horsepower and an impressive 738 pound-feet of torque. When placed in Power mode, the Polestar 1 is quick off the line and passes slower traffic with ease. It’ll do zero to 62 miles per hour in 4.2 seconds.

But all the power doesn’t take away the car’s grand tourer abilities. Whether I was carving through the mountains or on the highway, the Öhlins suspension was tight while simultaneously delivering a smooth ride. For an extra bit of car nerdery, the suspension can be manually adjusted for a stiffer or smoother ride.

Polestar originally thought about making this a feature that could be done electronically but decided to give drivers the ability to get under the hood to adjust their vehicle’s ride.

Regardless of the driving environment, the Polestar 1 handled it aggressively and comfortably. The steering is tight without being twitchy and the acceleration is always there when you need it. Typically, you get one or the other, but with this car, it does both stupendously.

But regular life isn’t a series of jaunts. It’s a lot of freeway driving, and the car’s drivers’ assistance package worked well. It’s actually the same system found on Volvos, which is a good thing. Adaptive cruise control had no issues with cut-ins and didn’t overly brake or accelerate as other cars moved in and out of its lane.

While a $155,000 vehicle that’s only one of 1,500 ever built seems like an odd commuter, it can do the job and probably handle most of that drive in electric mode. The 34kWh battery pack will probably deliver about 55 miles (after EPA testing) before needing to fire up the gas engine.

But that brings us to the battery pack itself. Actually, the three battery packs: two in the trunk and one that runs down the center of the passenger area. Polestar took a platform and removed approximately 300 millimeters of length while working on the car to make it look the way it does. That means that the battery pack takes up about half the trunk.

On one hand, the company put the wiring on display behind a scratch-resistant Plexiglass. It looks cool. On the other hand, you can only get about two roller bags and a backpack in there. It’s enough for two people for a weekend trip. Which works out well, because the back seats aren’t really large enough for an adult. The coupe has four seats, but only two will ever really be used unless the owner is driving around their small children. 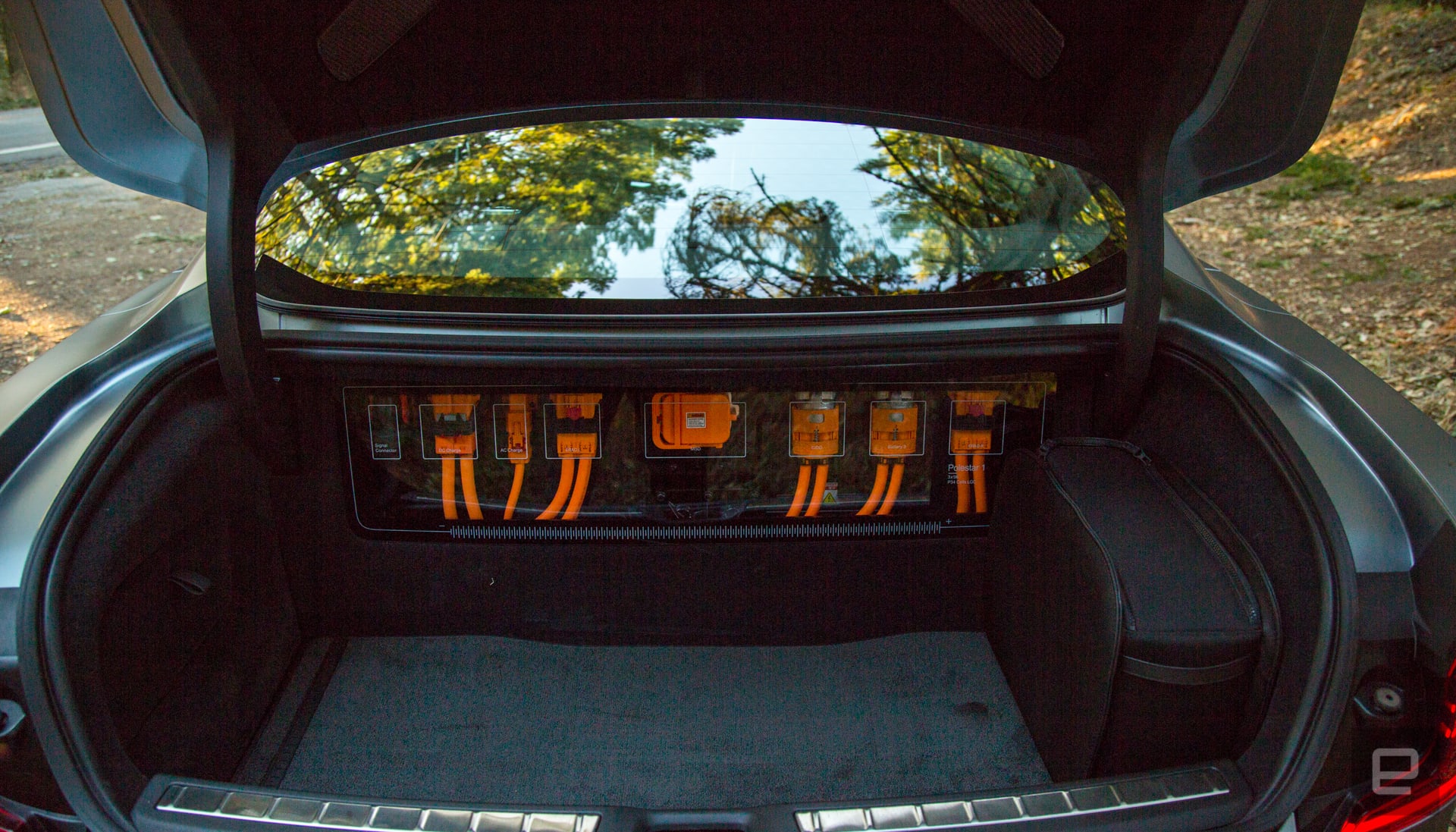 In other words, it’s not a car for four to drive to Palm Springs. Maybe your friends could meet you there while you tear through the desert in your Polestar 1?

On that drive, expect a lot of attention. During my time with the car, I had more people than I expected shooting video while I was driving or just generally gawking at it. There’s something to be said about a great-looking car that both enthusiasts and regular folks appreciate.

Inside, you’ll also notice that many of the elements in the vehicle are from Volvo. The steering wheel, buttons, center console, even the Sensus infotainment system are all Volvo. They’ve been rebadged with the Polestar logo, but it’s tough not to think you’re just driving a very nice, very fast Volvo while behind the wheel of the Polestar 1.

I really like Volvo’s interiors and infotainment system, so it’s not that big of a deal to me. But if you’re looking for some bespoke system in the car, you’ll be disappointed. That is until you turn on the vehicle and drive it for a few hours. Then you’ll forget all about the fact that this is based on a Volvo concept car and instead just enjoy the ride. 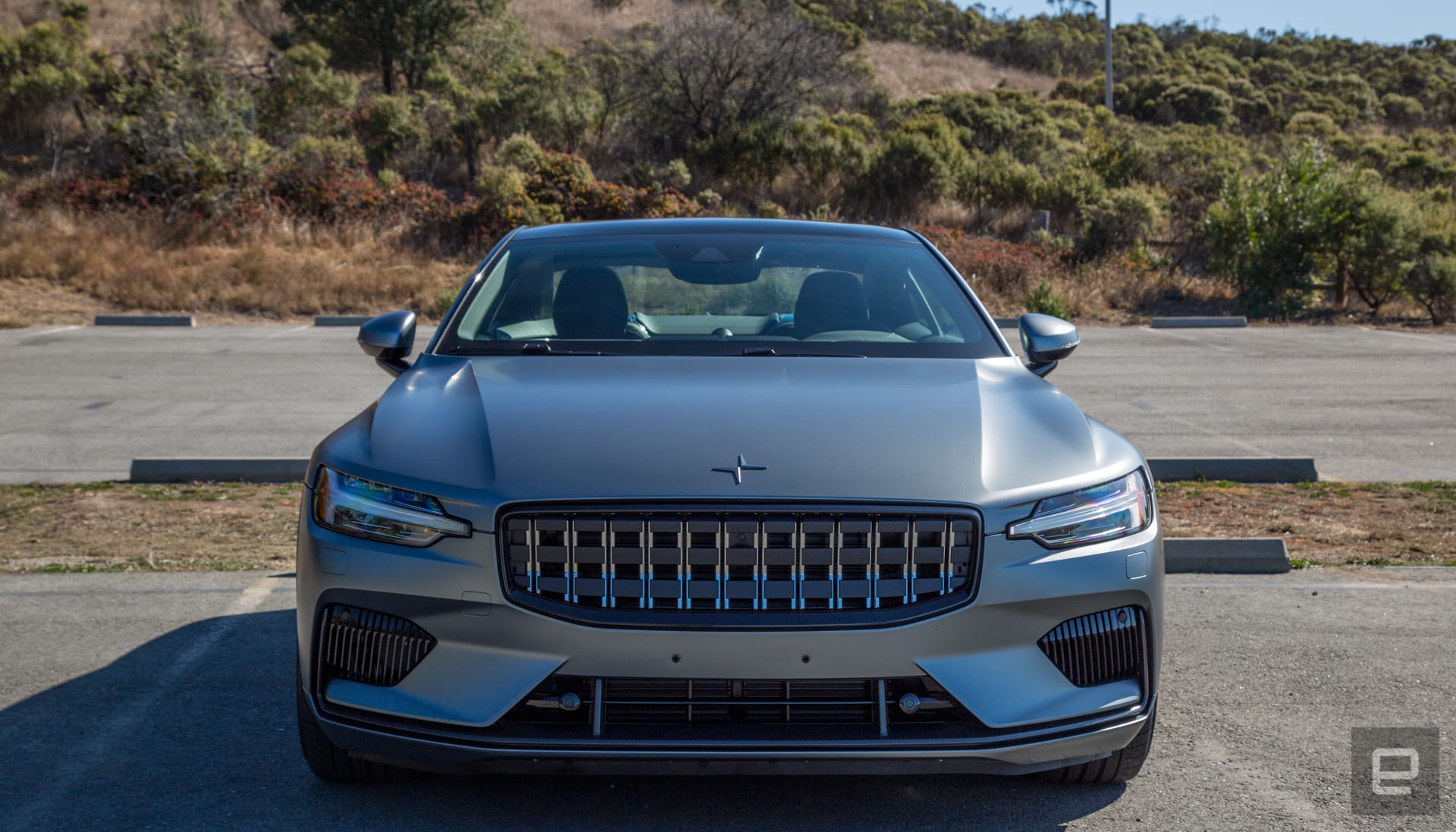 The Polestar 1 is expensive and will be in very limited supply. Only about 450 will make it to the United States during the car’s three-year production. It’s a halo car meant to get people talking about a new automaker before it switches entirely to electric vehicles. The Polestar 2, for example, will only set you back about $60,000, and if it drives anywhere close to the Polestar 1, it’ll be the car to get once it hits showrooms.

Why I Chose To Un-School My Son

Samsung Galaxy ‘1’ notification weirds people out around the world