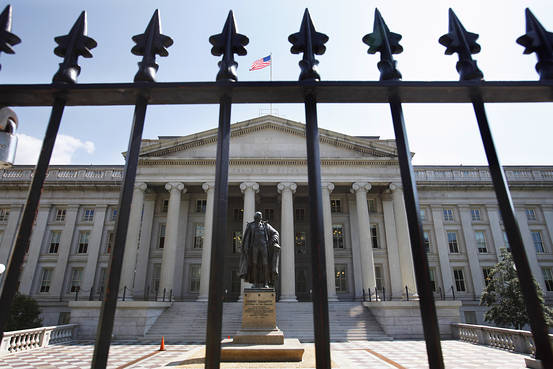 The debt ceiling limits the amount of debt that the U.S. Treasury can issue.
JACQUELYN MARTIN/ASSOCIATED PRESS

Congress and the White House are engaging in another familiar ritual: The brawl over the federal borrowing limit, known as the debt ceiling. Here’s a look at some of the most frequently asked questions, and answers.

What is the debt ceiling?

The debt ceiling limits the amount of debt that the U.S. Treasury can issue.

Before World War I, Congress approved borrowing for specific purposes, but over the next two decades, it granted more flexibility to the Treasury to issue bonds without individual, definite authorizations. By 1939, Congress effectively established an aggregate debt limit that delegated to Treasury the ability to borrow up to a certain ceiling.

Why is the debt limit in the news again?

Last year, Congress voted to suspend the debt limit through March 15, after which the prior limit of $16.7 trillion would be reset to include any new borrowing. On March 16, the limit was reset at $18.1 trillion. Since then, the Treasury has been using extraordinary measures, such as the suspension of certain pension investments, to conserve cash.

On Thursday, Treasury Secretary Jacob Lew told Congress that it would exhaust those emergency measures by Nov. 3. After that, it will fund the government only with daily cash flow if the debt limit isn’t increased. Analysts at the Bipartisan Policy Center, a Washington think-tank, estimate that the Treasury would run out of cash between Nov. 10 and Nov 19. 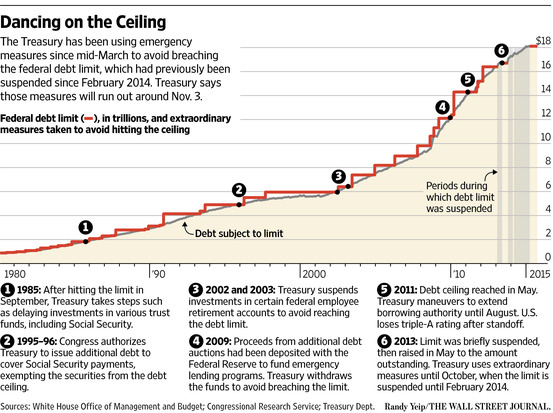 What would happen if the debt limit isn’t raised?

If the government can’t borrow to pay bills that come due, it would have to suspend certain pension payments, withhold or cut the pay of soldiers and federal workers, or delay payments of interest, which would constitute default. In 2011, Standard & Poor’s stripped the U.S. of its triple-A credit rating for the first time after Treasury came within days of being unable to pay certain benefits.

Could the Treasury prioritize debt payments to avoid a default?

House Republicans have advanced legislation to do that, but Treasury says prioritizing certain payments isn’t feasible.

If the U.S. paid some bills, such as interest payments on debt and Social Security payments to retirees, but not others, such as federal workers’ wages or contractors’ invoices, such an event could badly undermine the government’s creditworthiness, even though this might not meet the narrow definition of default on a government bond. It would be like a homeowner paying the mortgage but not all of his or her utility bills, says Ed Lorenzen, a budget analyst at the Center for a Responsible Federal Budget.

Have past debt-limit episodes changed investor appetites for buying debt?

The Government Accountability Office found that investors during debt-limit standoffs in 2011 and 2013 took unprecedented steps to systematically avoid certain Treasury securities that matured around the dates when Treasury said it would exhaust its extraordinary measures, a remarkable step because Treasurys are the lowest cost and most widely used forms of collateral in finance.

Another example: A word-processing equipment glitch at Treasury in April 1979 prevented the timely payment of principal and interest on federal securities that matured at the end of the month, triggering a technical default from late April through early May of that year. The accidental default led to a 0.6 percentage point increase in Treasury interest rates that lasted for nearly a year after interest payments resumed, according to a report issued last month by William Beach, chief economist on the Senate Budget Committee.

Who owns the debt?

More than two-thirds of U.S. debt is held domestically, either by retirement funds or mutual funds or by individual bondholders. The rest is held by foreigners, with around half of foreign ownership by investors or institutions in China and Japan.

Raising the debt ceiling allows Congress to pay for things that it has already decided to spend money on. Around one-third of federal spending is discretionary, for which Congress approves annual spending bills with specific instructions about how to spend the money. The other two-thirds is mandatory, meaning money is spent on certain programs established by existing law, such as Medicare, Medicaid and Social Security.

The debt ceiling has become a difficult vote for lawmakers because it’s viewed as one way to force fiscal restraint. If your bank doesn’t increase your credit card limit, the thinking goes, you’re going to have to cut back on spending.

Many economists and investors say that’s a flawed analogy because Congress has already voted to approve the spending. In that sense, refusing to raise the debt limit is a bit like dining and dashing at a restaurant. Congress knew the bill was coming when it ordered the meal. Refusing to raise the debt limit is like running out of the restaurant before paying the check.

Is this always a big partisan fight?

Members of the party not in the White House have sometimes used debt-limit increases to make life difficult for the president. In recent years, conservative lawmakers have used the debt limit a pressure point to enforce fiscal discipline. President Barack Obama and officials throughout his administration say they won’t negotiate on budget or policy changes in exchange for an increase in the debt ceiling.

What will happen this time?

No one knows exactly how this will play out. Senate Majority Leader Mitch McConnell (R., Ky.) has said Republicans in Congress won’t allow the government to default.

Many lawmakers expect House Speaker John Boehner (R., Ohio), who has announced his intention to resign Oct. 30, to work with Mr. McConnell on a debt-ceiling extension. They’re currently in talks with the White House and congressional Democrats about how to set government funding levels for 2016 and 2017 with an eye towards easing discretionary spending caps while cutting some mandatory spending.

One possibility would be to strike a deal on the budget that provides enough entitlement savings to secure some Republican support. That budget agreement might also include a debt-limit increase, getting two hard votes out of the way at once. Still, this is Congress, so it’s a safe bet that this will go down to the wire.

What’s the difference between the debt and the deficit?

When governments collect more money than they spend, they run a surplus. When they spend more than they collect, they run a deficit. Deficits create the debt and add to it; surpluses subtract from it. As the debt rises, this can exacerbate the deficit because more revenue has to pay interest on the debt, crowding out other spending.

For the fiscal year that ended Sept. 30, the Congressional Budget Office estimates that the U.S. ran a budget deficit of $435 billion, which represents around 2.4% of gross domestic product, the smallest deficit since 2007.

U.S. Could Run Out of Cash After Nov. 3, Treasury Secretary Lew Says