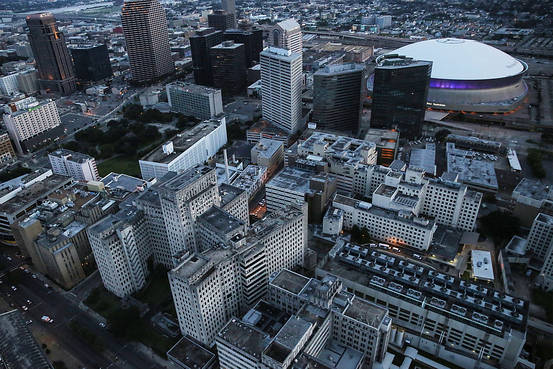 New Orleans was the only major metropolitan area to have lost jobs in July compared with a year earlier, the Labor Department said Tuesday.
MARIO TAMA/GETTY IMAGES

New Orleans has spent the past decade clawing its way back to normality after Hurricane Katrina decimated much of the city, causing residents and businesses to flee. But as of late, it’s struggling to hold onto jobs.

It was the only major metropolitan area to have lost jobs in July compared with a year earlier, the Labor Department said Tuesday. In the past year, 50 out of the 51 metropolitan areas with populations of one million or more saw a rise in employment, according to the Labor Department. But payrolls shrank by 3,800 in the New Orleans-Metairie area in July, with losses concentrated in construction and the manufacturing sector that includes oil refining.

The New Orleans-Metairie area steadily added jobs year over year from fall 2010 through February this year. Since March, the area has lost an average of 2,275 jobs each month compared with the prior year.

Meanwhile, with the overall national economic recovery, quality is uneven among the thousands of jobs that have come back since the hurricane. A recent in-depth analysis showed that many of the jobs created in New Orleans since the devastating hurricane are low-wage jobs in the hospitality industry, mainly in the city’s restaurants, for which it is renowned.

In the past three years, its monthly unemployment readings have swung between 7.9% and as little as 5%. So far in 2015, the unemployment rate has hovered between 6% and 6.9%.

Across the country, winners over the past year included the New York-Newark-Jersey City metropolitan area, which added 164,400 nonfarm jobs between July 2014 and July 2015. Los Angeles-Long Beach-Anaheim, in California, saw 157,500 jobs spring up in the past year. Dallas-Fort Worth-Arlington, Texas, continued to add jobs to the tune of 121,700, even as the energy industry took a hit from falling gas prices.

Overall, 322 out of 387 metropolitan areas added jobs in the past year. Eleven were unchanged, and 54 lost jobs.