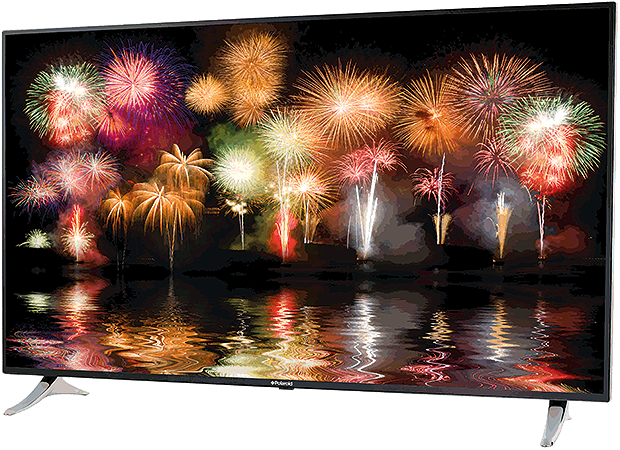 Polaroid has launched two cut price, Ultra High Definition (UHD) or 4K TVs. Available exclusively at Asda, Stuart O’Connor reviews the larger 65inch model and asks whether it is worth the money

If you’ve never experienced a big-screen television before, then prepare to be gobsmacked. because the first thing that you notice when you unbox the 65in Polaroid Series 6 TV is that it is BIG. It’s too big for one person to handle, which means that it needs two people to set it up – for both the actual size of the thing, and the weight (it’s about 22kg). But it’s decently thin at just 38mm.

Once you screw the legs on and have the TV sitting on the platform of your choosing, the rest of the setup is pretty easy and straightforward. Tuning in the 27,147 channels available these days (only about five of which you will ever actually watch) is automatic and fast, and once done, setting up a “favourites” list is a piece of cake thanks to a decent remote and an intuitive menu.

But like most of us, you probably won’t be watching anything through the actual TV – you will probably be using a games console or a set-top box (although the TV does have built-in Freeview HD and Polaroid Smart Portal). And it would be best to do so, as the built-in TV tuner is pretty average – if watching through an Xbox One, for example, you will notice quite a difference in the picture quality.

Round the back of the set, connectivity consists of an aerial slot, four HDMI ports (better than many modern TVs, but still not really enough), three USB slots, AV inputs, a Scart socket, a digital optical audio port, a VGA PC input, a CI card slot and a LAN port for an ethernet connection – the TV can also go online via Wi-Fi. The set also features Bluetooth connectivity and comes with four pairs of quite comfortable 3D glasses.

One thing this TV is great at is 3D. Watching 3D films is a joy, with decent colour and brightness and very little ghosting (and any of that is more than likely down to the film itself and not the screen). The picture quality from Blu-ray is also crisp and sharp, as you would expect from a 4K HD screen. Both sizes of the Polaroid Series 6 (it also comes in a 55in model) feature a 3840×2160 display, which again will deliver a clear, sharp image depending on the source material, There is not a lot of content being broadcast in 4K (UHTV) yet, though there is some on BT Sport, Netflix and now Amazon Instant Video.

Where the screen falls down a little is with gaming. When there’s not much action happening on the screen, the image is – as with films – excellent quality. But when there is a lot of movement going on, the TV seems to struggle to keep up with the action, which means the picture can get a little blocky – which is indicative of the processor struggling to keep up.

So if you are after a new 4K HD TV to mainly watch films etc on Blu-ray, and not for gaming, then the Polaroid Series 6 is worth a look. The range is available exclusively at Asda and is priced at £699 for the 55in and £1099 for the 65in model. And if you can afford it, then bigger is certainly better.