5 Of The Most Frightening Moments In The History Of Spaceflight

Halloween is that time of year when we celebrate the scary, terrifying, and downright spooky. So what better time to look at some of the most hair-raising moments in space?

We’ve been a space-faring species for almost six decades now, and along the way there have been some nail-biting moments when catastrophe seemed imminent. From seemingly doomed manned space missions to an incredible landing on another world, we take a look at some of the most terrifying near-misses to occur in the history of spaceflight.

Out of control in Earth orbit

On March 16, 1966, Neil Armstrong launched on his first flight to space with David Scott aboard the Gemini 8 spacecraft, the sixth manned mission of the Gemini program – the precursor to the Apollo program. The mission was intended to practice docking techniques in Earth orbit, with an unmanned Agena target vehicle. Not long into the mission, though, things started to go wrong.

Several hours after launching, Gemini 8 docked with the Agena vehicle – the first ever successful space docking. However, half an hour later, both vehicles began to go into a violent spin. Armstrong, the pilot, managed to disengage Gemini 8 from Agena, but with the unnerving result of accelerating their spin – up to one revolution per second.

“We have serious problems here,” Scott radioed down to Houston. “We’re– we’re tumbling end over end up here. We’re disengaged from the Agena.”

Shown is the Agena target vehicle as seen by the Gemini 8 spacecraft. NASA.

Ultimately, Armstrong was able to wrestle back control by using the spacecraft’s re-entry thrusters. It took about 30 seconds to stabilize Gemini 8 – but using those thrusters meant that the mission had to be aborted two days early. Scott and Armstrong began re-entry procedures and splashed down in the Pacific Ocean less than 11 hours after launching. Both of them threw up, into the solitary sick bag.

It was an incredibly close call, but ultimately hugely rewarding for both astronauts. Armstrong, after avoiding a later test disaster on Earth, would become the first man on the Moon in July 1969. Scott would also go to the Moon, on the longer Apollo 15 mission. But how different things could have been if the Gemini 8 catastrophe had escalated.

Up until 2012, all Mars landings had taken place using large inflatable air bags to “bounce” unmanned landers across the surface before they came to rest. That all changed with the Curiosity rover, though – and it proved a frightening encounter for those in mission control.

Curiosity was too large and heavy for the airbag method, so instead, NASA devised an ambitious “Sky Crane” system for Curiosity’s landing on August 5, 2012. After plunging through the Martian atmosphere, four thrusters would turn on, hovering 20 meters (65 feet) above the surface and lowering the rover to the ground on a cable. Such a landing had never been attempted on another world before.

The time between Curiosity first encountering the Martian atmosphere and its planned landing was seven minutes. Owing to the time delay of communications between Earth and Mars, engineers on Earth had to let the whole system run autonomously, and hope everything worked as planned. NASA dubbed this the “seven minutes of terror.”

Thankfully, the landing passed without a hitch, to wild celebrations at NASA’s mission control. The rover was in extremely good health, and it is now continuing to make its way around the fascinating Gale Crater and its central peak, Mount Sharp. Thanks to that incredible landing system, we are finding out much more about how wet and habitable Mars once was.

The video above explains the challenges of landing Curiosity on Mars.

Apollo 13 was scheduled to be the third landing of humans on the Moon. And aside from a minor fault at liftoff on April 11, 1970, the mission had been going smoothly for its crew of John Swigert, Fred Haise, and James Lovell.

But 55 hours into the mission, at a distance of 320,000 kilometers (200,000 miles) from Earth on April 13,1970, one of the spacecraft’s oxygen tanks exploded. The crew faced the very serious prospect of being marooned in space. “Houston, we’ve had a problem here,” Swigert famously radioed down to mission control. 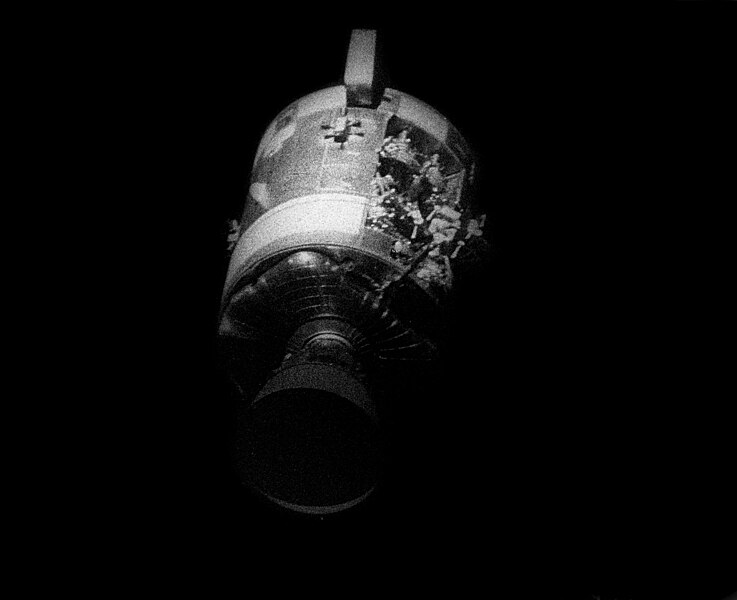 Shown is the crippled Service Module, pictured by the crew. NASA.

With oxygen being vented into space, and available electricity falling, the crew were forced to seek refuge in the Lunar Module, which they would have used to land on the surface. With the landing aborted, the team swung around the Moon – rationing food and water – in a desperate attempt to return home.

The efforts of NASA and the crew proved successful. On April 17, 1970, the crew safely splashed down in the Pacific Ocean. “Some years later I went back to the log and looked up that mission,” Flight Director Gerald Griffin recalled at a later date. “My writing was almost illegible, I was so damned nervous.”

The full story of Apollo 13 is gripping and a great example of human ingenuity. If you’ve not seen the movie based on the mission, we’d highly recommend doing so.

The astronaut who nearly drowned in space

On July 16, 2013, Italian ESA astronaut Luca Parmitano exited the International Space Station (ISS) on what was supposed to be a routine spacewalk. It was anything but.

Parmitano began his spacewalk with NASA astronaut Chris Cassidy at 7:57 a.m. EDT (11:57 a.m. GMT), and together they were to prepare the station for the arrival of a new Russian multipurpose laboratory module, called Nauka.

One hour and nine minutes into the spacewalk, however, Parmitano reported that his helmet was filling with water. It began to cover his nose, making it difficult to breathe, and he would later recount that he had the very real fear that he couldn’t be sure “that the next time I breathe I will fill my lungs with air and not liquid.”

Blinded by the water, Parmitano used his safety cable to make his way back to the hatch. Eventually, with the help of Cassidy, he made it inside, repressurized, and was able to get the suit off with his ears full of water. Cassidy later described it as a “scary situation.”

The problem was eventually found to be the result of a clogged filter, and the suits have since been fixed to ensure it doesn’t happen again. For Parmitano, almost drowning in space once was probably enough. Shown is a recreation of the water problem Parmitano experienced. NASA.

When Mir almost had to be abandoned

Before the ISS we had Mir, a vast Russian-built space station that eclipsed in size all space stations before it: the Soviet Salyut stations and the American Skylab. It remained in orbit from 1986 to 2001, but in 1997 it very nearly had to be abandoned in a freak accident.

At the time, Russian cosmonauts Vasily Tsibliev and Aleksandr Lazutkin were joined on the station by NASA astronaut Michael Foale, one of the joint US-Russian missions that would ultimately lead to cooperation in building the ISS.

On June 25, 1997, the Russians were attempting to undock and re-dock a Progress cargo spacecraft with the station to test the feasibility of manual dockings. Tsibliev was controlling the spacecraft, but he was unable to judge the speed. Lazutkin saw Progress coming in too fast, and despite firing the braking rockets, the station seemed doomed. “Michael, get in the escape ship!” He said to Foale.

The Progress impacted, tearing a hole in one of the solar panels and sending Mir into an uncontrollable spin. Foale, together with the crew on board and ground control, rushed to get the station back in operation. Power was dropping quickly, and there was a leak in one section that had to be contained. The reserve batteries eventually ran out, meaning the station was operating on solar power alone, and the crew was left without any power at all each time they were on the night side of Earth.

Shown is the damage to the space station. NASA.

Eventually, Foale and the Russians were able to bring the station back under partial control using a docked Soyuz spacecraft’s thrusters, and with ground control also firing the station’s own thrusters. An evacuation had looked imminent, but they were able to remain on the station, and Mir stayed in orbit for another four years.

This remains the most serious collision in the history of manned spaceflight, and for the crew on board, it was certainly a terrifying moment. You can read Foale’s account of what happened in a fascinating interview for the Shuttle-Mir Oral History Project.

The video above includes an animation of the collision.