Indeed, the decision on whether to raise interest rates after a period of cheap money has traditionally sparked heartfelt disagreement, and did so again at the Bank of England’s August policy meeting, minutes of the session revealed Wednesday.

On this occasion, two members of the bank’s rate-setting Monetary Policy Committee, Martin Weale and Ian McCafferty, broke ranks to call for raising the bank’s benchmark interest rate to 0.75% from the current record-low of 0.5%. They were outvoted by the other seven committee members, who preferred to hold the rate steady.

Until these dissents, BOE Governor Mark Carney had enjoyed a pretty laid-back time as head of the table since he assumed the top job in July last year: Before the August meeting, all his policy rate decisions were backed unanimously by the full committee. Even before he arrived, the last couple of years his predecessor Mervyn King spent in charge of the central bank were free from dissension when it came to interest rates—quantitative easing was a more controversial topic.

From a historical perspective, however, the family dinner analogy stands: Diverging opinions on rate-setting were much more usual than what recent times indicate. Looking at the records published by the BOE, the committee has disagreed 45% of the times it has met since June 1997. 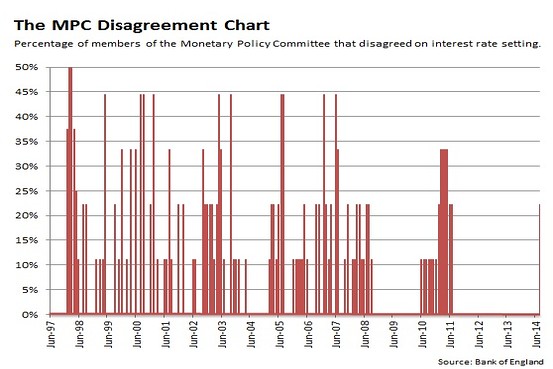 Despite controversial moves such as the use of unconventional monetary policies and ultra-low interest rates, the financial crisis of 2008 seems to have spurred consensus. The main exception was the period after 2010, when the U.K.’s gross domestic product started to grow—before falling again at the end of the year.

The last time the MPC was in disagreement was July 2011, two years after the benchmark rate had been lowered to 0.5%. The hawkish voice was that of Mr. Weale, a former Cambridge economics professor, who joined Spencer Dale in raising inflationary concerns.

Back then, as now, Mr. Weale wanted a small rate increase on the grounds that it would return inflation-fighting credibility to the BOE and prevent more aggressive hikes in the future.

Mr. Weale is currently the third-longest sitting member of the MPC—having been reappointed for a second third-year term in 2013—and the only one with any hawkish pedigree: He has argued in favor of raising rates in 16% of the meetings he has attended, the rest being votes to maintain them at the same level.

Of the rest of the members, during their terms on the committee none has voted to change rates until Mr. McCafferty’s dissent this month.

All in all, Gov. Carney still seems to be dealing with little more than a fun uncle at the table. For now.