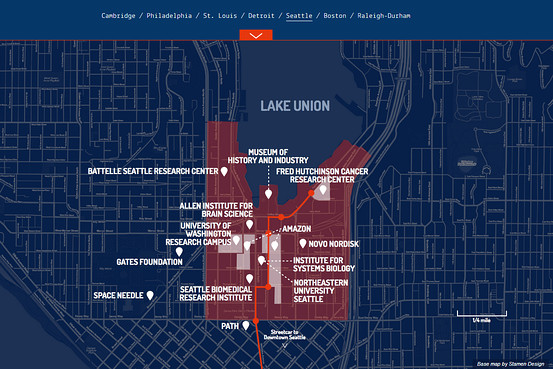 Once-rundown industrial urban districts could begin to give the traditional suburban corporate research park a run for its money, says a new paper from the Brookings Institution.

Researchers Bruce Katz and Julie Wagner offer several examples of the rise of the so-called “innovation district,” in which acres of shabby city warehouses, often located downtown, are being re-purposed as research centers that are luring top talent given their walk-ability and density.

That’s a break from the past, when pharmaceutical companies and engineering firms preferred for sprawling—but relatively inaccessible and closed—research centers in the suburbs.

Where’s this happening? The paper spotlights redevelopment in several:

“There is a shift towards open innovation: firms want to be closer to the big ideas,” which often means locating in the middle of cities, near universities, start-ups, and other business incubators, said Mr. Katz.

Their paper argues that these changes could further reshape cities, and they focus on several examples where they say underutilized industrial districts are being remade by technology, bio-medical, and even light manufacturing firms.

What are the key ingredients of this new model of urban development? Seedier industrial or waterfront areas have offered cheap real estate that can be repurposed. These areas tend to be closer to midtown or downtown districts, which in many cases are already becoming sought-after residential destinations. They’re also close to transit hubs and they tend to have a university or two or another anchor research institution.

There’s more in the full report and an online introduction.