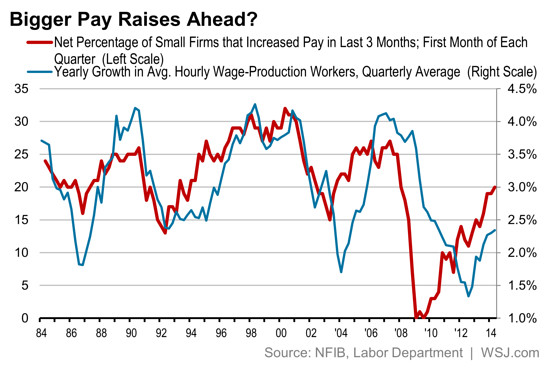 New data out Tuesday suggest tight-fistedness may finally be ending. If so, faster pay growth will add a significant support to consumer spending in the second half and beyond.

Nonfarm payrolls increased by an average of 230,000 new jobs per month in 2014′s first half, and the latest Job Openings and Labor Turnover survey shows that companies, as of the end of May, had increased the number of job openings almost back to pre-recession levels.

Despite greater demand for workers, pay scales have not budged much.  Wages for all private-sector employees increased 2% in the year ended in June, according to the Labor Department, exactly where wage growth has trended through all of this recovery.

News from the small-business sector, however, suggests pay growth is ready to break out of the 2% range.

According to the June survey of small firm owners by the National Federation of Independent Business, a net 21% of small businesses report lifting compensation in the last few months. That is the highest reading since the end of 2007, right before the Great Recession started.

Small companies are probably lifting wages to attract qualified job applicants and retain valued employees. Historically, a greater willingness among small businesses to dole out pay raises tends to be a leading indicator for rising growth in the average hourly wage for production workers. In turn, that subset of employees’ pay front-runs the growth in all private pay. (The Labor Department’s all-employee data only go back to 2006.)

Even with the time lag, the uptrend in small-firm pay suggests economy-wide wage growth will soon accelerate. As a result, households’ pot of spending money should expand faster than the inflation rate as long as food and gasoline prices don’t suddenly shoot up.

Better buying power for existing workers, coupled with more job seekers finding employment and paychecks, will provide a big boost to personal incomes. That means consumers will be better able to increase spending in the second half.