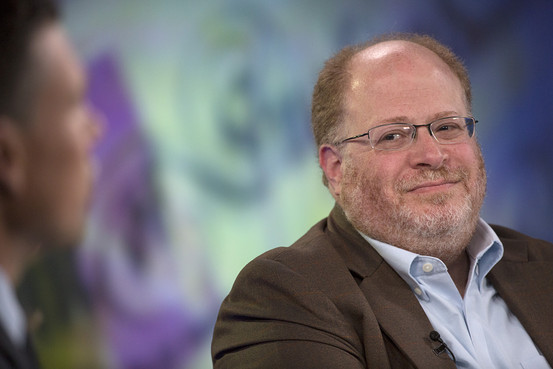 Adam Posen reacts during a television interview in London on June 16, 2014.
Bloomberg News

A year and a half after Prime Minister Shinzo Abe launched his program to end Japan’s long slump, a number of economists are turning skeptical about prospects for success. One remaining optimist — albeit with some caveats — is Adam Posen, president of the Washington D.C.-based Peterson Institute for International Economics, and a long-time student of Japanese economics and finance. He also sits on the panel of economic advisers to the U.S. Congressional Budget Office and is a former member of the Bank of England’s monetary policy committee.

The Wall Street Journal sat down with Mr. Posen in Tokyo recently to get his assessment of how the “Abenomics” experiment is working.

The gist of Mr. Posen’s argument is that despite some short-term setbacks, there are plenty of positive signs Japan is on track to return to steady growth and end deflation. But progress will be slow and unsteady, in part because he believes Japan must balance its growth strategy with a plan to curb its debt.

Current disappointment is partly the fault of the “spin” that higher prices would lead to a self-reinforcing cycle of higher wages, spending, and investment, he said. “It would be nice to have. But it wasn’t virtuous cycle or death spiral. We’re out of the death spiral. That’s good.”

Here are edited excerpts from the interview:

WSJ: Many economists say the hit from the April 1 sales tax increase was greater than expected, and potentially debilitating for the economy. What do you think?

Mr. Posen: The question is, does this say something about the underlying trend being weaker? And does this one data point show that Japan is suffering a serious short-term problem? I think the answer to both is no. This is well within the range of variation of what happens in a normal economy.

Most importantly, while this is a slowdown, we’re still talking positive growth. Japan has to start comparing itself in some ways to Europe. When Spain and Ireland did serious fiscal consolidation, they suffered through a few years of negative growth.

WSJ: Is there a danger the economy can’t withstand the tax hike?

Mr. Posen: When I think about an economy not withstanding it, I mean an economy being thrown from a growth period into a recession, financial firms being thrown from profitable into fragile, employment declining. And none of that’s happening in Japan … I think people are overreacting.

WSJ: One source of concern is that wage increases aren’t keeping pace with inflation, threatening to dampen consumption.

Mr. Posen: A lot of us came out early in 2013 and tried to tell the public and the government that they had to get wages up … And the government tried. It didn’t happen. So of course things are worse than they would have been if they had … There has to be renewed pressure on corporate Japan to give decent wage increases in the next year.

WSJ: Another worry has been the surprising weakness in exports.

Mr. Posen: That to me is the troubling part of this — that we saw the massive depreciation of the yen … and we’re just not seeing the response in exports. Now I think this is potentially a structural problem…

WSJ: Do you think the Bank of Japan is on track to meet its target of 2% inflation in two years?

Mr. Posen: I do. I am convinced that on a nominal basis, the BOJ will deliver something close to 2% inflation. Maybe it’s going to be 1.7 or 1.8 instead of 2. Maybe it will take another few months to get to 2 … Inflation is on an upward trend. More importantly, inflation expectations are on an upward trend. They don’t need to drastically intervene in the economy to further stimulate growth, because growth isn’t that bad…

WSJ: So with weak wages and weak exports, does it make sense to go ahead with the planned tax increase next year?

Mr. Posen: The issue is, unfortunately, grit your teeth and bear it…

It’s ultimately just a reality that while you’re paying down the debt, or paying for the social welfare state you’ve got, growth isn’t going to be that fast.

WSJ: What’s the risk to not raising taxes?

Mr. Posen: Usually when a country is seen as being on a less fiscally sustainable or less fiscally credible path than it used to be, you crash the currency.

WSJ: Isn’t that what Japan wants?

Mr. Posen: They will discover if that happens isn’t really what they want … The export response to a decline in the yen is much less than it used to be. If you care about real incomes, a significant decline in yen will be inflationary and will further erode real incomes … Third, we know that Japan’s importing an awful lot of energy now. And this is just going to make that harder to pay for and more painful.

WSJ: So what do you think is going right, right now?

So all of that’s going right. It’s just not going well. That’s what happens when you run out of room…

Japan is not Greece. It’s not going to end with Japan hitting a wall. It’s just things are going to be less pleasant for a while…

It’s partly the fault of the spin that everybody talked about the virtuous cycle (of higher inflation leading to higher wages, spending, investment, etc.)  It would be nice to have. But it wasn’t virtuous cycle or death spiral. We’re out of the death spiral. That’s good.