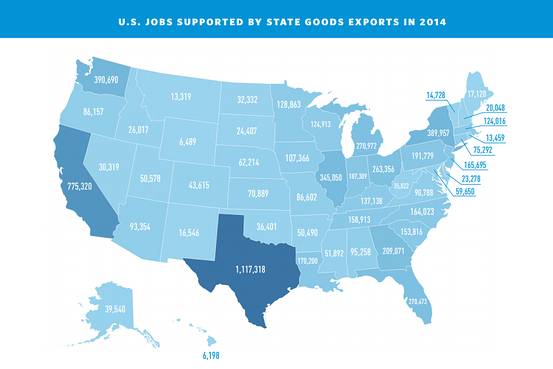 Some 11.7 million jobs were supported by exports last year, with almost 10% of those jobs coming from Texas, according to a report released by the Obama administration on Thursday.

The state-by-state look at the benefits of exports was another blast in the administration’s concerted campaign this week to build support for its trade agenda as Congress begins to debate whether to grant President Barack Obama expanded trade promotion authority in coming weeks.

Commerce Secretary Penny Pritzker told reporters Thursday she expected the Senate could unveil a draft of a bill to ease the passage of trade agreements early next week. “We’re anxiously awaiting to see the language,” she said.

The state analysis of trade showed California, Washington, New York and Illinois rounded out the top five states with jobs supported by exports last year, behind Texas. Those five accounted for more than 25% of all export-backed jobs, according to the report, which was compiled by the Commerce Department and the Office of the U.S. Trade Representative.

The report also provides a breakdown by state of exports to the 11 other countries who are negotiating the Trans-Pacific Partnership, or TPP, a trade deal with Japan, Australia, Canada, Mexico, and other Pacific rim nations.

The Obama administration is pursuing legislation known as trade promotion authority that allows for up-or-down votes on trade deals. Obtaining so-called “fast track” authority would give the U.S. the leverage to “speak with one voice…and make sure we can get the best deal” on the TPP, said U.S. Trade Representative Michael Froman on Thursday.

The fast track legislation faces opposition from many Democrats, labor unions and environmental groups. Activists have targeted Sen. Ron Wyden of Oregon, who is the top Democrat on the Senate panel that oversees trade policy.

Conservative Republicans in the House of Representatives pose another threat to the White House. While Republicans tend to support trade broadly, several conservatives say they’ve lost faith in President Barack Obama’s international negotiating abilities and are reluctant to hand him greater authority.

Thursday’s report followed a speech the day before by Jason Furman, the chairman of the White House Council of Economic Advisers, touting the benefits of trade in boosting productivity and innovation.

On Tuesday, Defense Secretary Ash Carter warned that the U.S. risked losing influence in Asia if the White House couldn’t secure the trade promotion authority needed to conclude the TPP.

“Time is running out,” he said. “We already see countries in the region trying to carve up these markets.”