Former Secretary of State Hillary Clinton, or any other potential Democratic candidate in the next presidential race, may need to have a plan to close the revolving door of Democratic economic advisers if she hopes to gain stronger support from America’s labor movement. 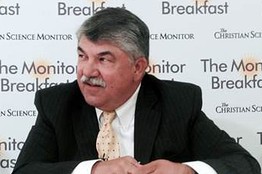 AFL-CIO President Richard Trumka, who leads the country’s largest labor union, said Thursday that he’s far from endorsing Mrs. Clinton or anyone else in the 2016 presidential race, but expressed concerns about rehashing the policies of the Obama and Bill Clinton administrations.

“One of our biggest concerns is, who is the candidate’s economic team?” Mr. Trumka said at a breakfast hosted by the Christian Science Monitor. “If the president changes, but the economic team doesn’t change…you’re going to get the same economic policies.” Several members of President Barack Obama‘s economic team, including Treasury Secretary Jacob Lew and his predecessor, Timothy Geithner, also worked in the Clinton administration.

Mr. Trumka said Democrats should be wary of turning to advisers who “came from, participated in and will go back to Wall Street.” Speaking to reporters after the event, Mr. Trumka pointed specifically to Robert Rubin, a Treasury secretary under Mr. Clinton, as someone Mrs. Clinton should avoid. After leaving the Treasury, Mr. Rubin took an executive role at Citigroup Inc.

Mr. Rubin advised the Obama campaign but hasn’t had a formal role in the current administration. However, former Obama economic advisers Gene Sperling and Larry Summers worked closely with Mr. Rubin during his time at Treasury and held positions in the Clinton White House. The union leader didn’t offer any specific suggestions of who Mrs. Clinton or any other candidate should seek out.

While voicing general support for the president, Mr. Trumka said the White House has failed to address the union’s concerns with the North American Free Trade Agreement and aspects of the tax code that he says favor sending jobs overseas. This year, the president “started off very well, focusing on income inequality, but he hasn’t stayed aggressive enough,” Mr. Trumka said.