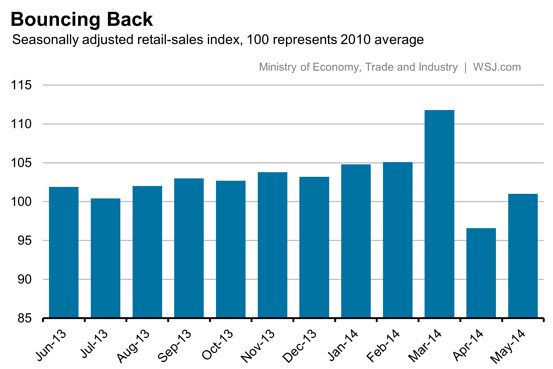 Japanese private consumption showed signs of recovery in May after it plunged on April’s sales-tax rise, an encouraging sign for Prime Minister Shinzo Abe’s push to lift the economy out of its long funk.

Retail sales rose 4.6% on-month in May, the Ministry of Economy, Trade and Industry said. Compared to a year earlier, sales were down 0.4%.

Other data showed household spending grew 0.6% on-month after removing volatile items such as home repairs and auto purchases, according to the Ministry of Internal Affairs.

The monthly pickup in May retail sales follows a revised 13.6% drop in April after Japan’s sales tax rose to 8% from 5% on April 1, the first such increase in 17 years.

Private consumption, which accounts for some 60% of Japan’s economy, will be key to any recovery. That’s especially the case as global growth remains tentative, clouding the outlook for Japanese exports.

Friday’s data suggest the sales-tax move hasn’t derailed Mr. Abe’s economic revival drive – although the retail data omit spending on services, which account for about 60% of private consumption.  The sales tax is scheduled to rise to 10% next year.

For the second quarter as a whole, however, private consumption is expected to show some decline. Capital Economics predicts private consumption for April-June will fall by 2.5% from the first quarter, shaving some 1.5 points off of headline gross domestic product.

Second-quarter GDP, due out Aug. 13, is expected to have shrunk around 4% on-quarter, after it surged 6.7% on-quarter to start the year as people rushed to make purchases before the sales tax went up.

The strength in May retail sales was seen in relatively inexpensive items such as food and beverages. Warmer temperatures boosted spending on ice cream and other takeaway food items.

Sales were robust for clothing, especially at discount chains such as Uniqlo. Sales of branded clothes, mainly through department stores, remained weak.

Sales of big-ticket items — including cars, refrigerators, and washing machines — continued to reel from the sales-tax increase.

With summer bonuses paid out in late June, government officials will look to see if the strength in private consumption broadens out in July and August. Government economists say hopes for higher bonuses — and eventual increases in regular wages — have helped support private consumption so far, even as consumer inflation rises.

“Whether the recovery spreads to durable items like autos and appliances, which have a large weighting in retail sales, will determine the strength of an expected economic recovery in the latter half of the year,” one government economist said Friday.