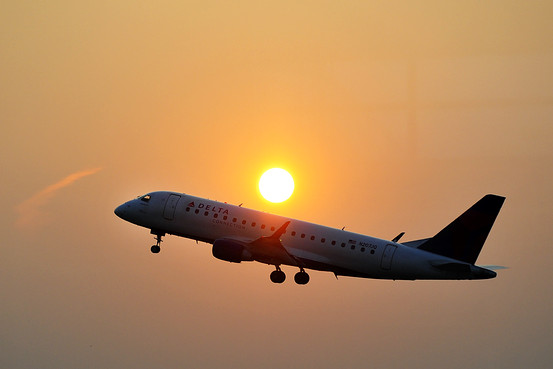 Are you hoping falling oil prices will make it cheaper to fly? Well, keep hoping.

International oil prices have fallen more than 40% since mid-June as global supplies have piled up amid a production boom and weakening demand overseas.

Yet U.S. airfares rose at a healthy 5% clip between July and September after a 7.6% rise in the prior three-month period, according to the Commerce Department’s quarterly report on travel and tourism spending released Thursday.

In comparison, prices for “transportation-related commodities,” which include gasoline and automotive rentals, fell by 4.7% over the summer months. 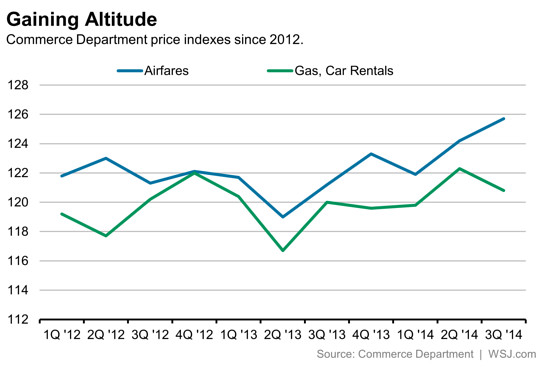 “Filling up the gas tank in your car became quite a bit cheaper,” said Paul Kern of the Commerce Department’s Bureau of Economic Analysis.

Fuel is the airline industry’s biggest expense, yet companies have been slow to pass their savings through to customers. One reason is that airlines lock in purchase prices far in advance through hedging arrangements designed to protect them from large fluctuations.

Delta Air Lines Inc. told investors last week that it expects pretax income to jump 11% next year but that the gain could have been much larger without the hedges.

Another reason is that U.S. airlines currently enjoy much greater pricing power after a period of industry consolidation. Flights are full, so they have little incentive to lower prices.

Profits for the overall industry are poised to rise more than 10% next year, according to a forecast last week from the International Air Transport Association.

Where U.S. Factories Have the Most to Gain From Cheap Oil

WSJ Survey: Oil Prices Are Near Their Bottom