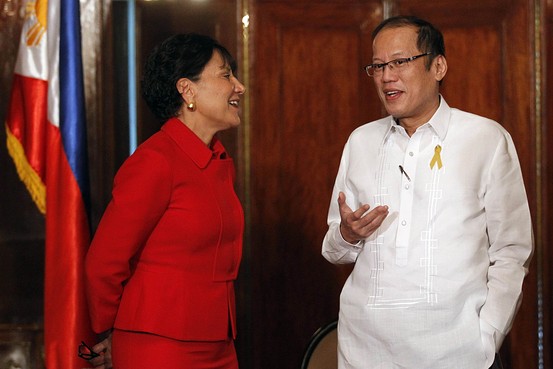 Philippine President Benigno Aquino III gestures while talking to visiting U.S. Secretary of Commerce Penny Pritzker during her visit to the presidential palace in Manila on June 4.
Reuters

MANILA, The Philippines–U.S. Commerce Secretary Penny Pritzker’s recent visit to Manila was a reminder that the U.S. is just as interested in expanding its economic footprint in the region as its military one.

“We see that there’s a plethora of sectors where U.S. businesses could be more active here in the Philippines,” Ms. Pritzker told The Wall Street Journal, listing infrastructure, telecoms and healthcare as areas in which American businesses could thrive.

The lift-off of the Philippine economy has clearly piqued American interest, with the Philippines’ gross domestic product – hitting $250 billion in 2012 – set to top $1 trillion by 2030.

That represents a huge opportunity for U.S. companies to sell goods and services and increase bilateral trade, currently worth a pedestrian $24 billion, according to Ms. Pritzker.  By comparison, trade with Thailand – which is suffering from massive political and economic uncertainty – reached $38 billion in 2013.

Given the Philippines’ chronic power shortages, electricity generators and distributors may stand to benefit the most. AES Corp. has already invested $1 billion in the country, based on that assumption, and it plans to spend another $1.2 billion doubling the capacity of an existing power plant in Zambales province.

“We’re very impressed by the strong economic growth in the Philippines,” the company’s CEO and President Andres Gluski, said during a meeting of American and Filipino business leaders this week.

“What you’re hearing is that American business is optimistic about the future of the Philippines for the long haul, given the progress that’s been made in terms of reforms, of fiscal responsibility,” said Ms. Pritzker.

And that matters for companies looking to build power plants or erect telecom infrastructure, investments that take time to develop, she added.

The Philippines moved up 30 spots on the World Bank’s 2014 ease of doing business report, but some U.S. companies may find that reforms have not gone far enough, with the country still ranking fairly low – at 108th out of 189 countries.

Others may find the competition too fierce, with Japanese and Korean companies already well-established in the country and local conglomerates still in control of large sectors of the economy.

And, of course, robust economic growth is no guarantee of foreign investment when there is plenty of regional competition. Ms. Pritzker also stopped in Myanmar and Vietnam – two other fast-growing Southeast Asian economies – on her visit to the region.