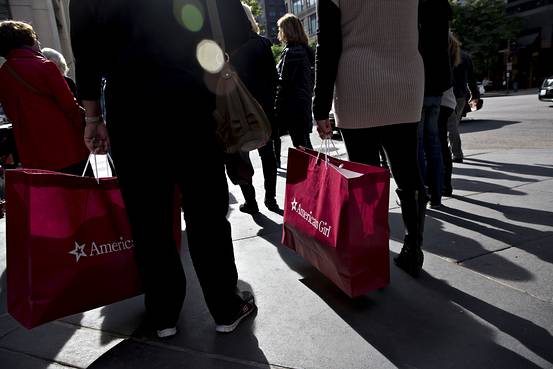 U.S. consumers are feeling pretty good about the economy. So are the Chinese. But Europeans are anxious in the wake of a migrant crisis, a new report from Nielsen shows.

U.S. consumer confidence surged in the third quarter of the year to its highest level since Nielsen began conducting its global survey a decade ago.

“Despite some mixed economic signals from the U.S., consumer confidence has strengthened and consumer spending is driving the economy,” said Louise Keely, a senior vice president at Nielsen and president of The Demand Institute. The report is due to be published early Tuesday.

The 18 percentage-point jump in U.S. consumer confidence comes despite a marginal uptick in spending by Americans in September, the slowest increase since January. China’s market turmoil and growing worries the world’s second-largest economy may be slowing at a much faster pace than expected fomented turbulence in markets across the globe, including in the U.S.

According to the Nielsen survey, however, consumers may be shrugging off those worries, a potential harbinger for stronger spending in October.

Chinese consumers, meanwhile, don’t appear to be fazed by rising debt levels, slumping manufacturing and slowing growth prospects. Consumer confidence in the country was roughly flat for the quarter.

But rising worries in Europe over the risk of terrorism and the potential economic impact of the region’s refugee crisis threatens to stifle rising consumer hopes in the area, Ms. Keely said.

“There was a pretty significant pick-up in concerns in many European countries and also some Middle Eastern countries about terrorism, war and immigration,” she said. “We think in Europe, it’s linked to the refugee crisis and generally heightened awareness and sensitivity around some of the dynamics in the Middle East and how it may be affecting Europe.”

In Germany, for example, where a huge number of refugees are flooding in from the Middle East, 23% of respondents said that terrorism was a top concern. That’s a rise of eight percentage points over the previous quarter. There was a similar jump in terrorism-related worries for all of Europe, and anxieties over immigration also swelled.

Global Consumer Sentiment Is Souring, Except Where You’d Expect

U.S. Consumers Splurged with Gas Savings After All, Study Finds

Big U.S. Cities Are Adding Jobs, Cutting Jobless Rates. How Does Yours Rank?