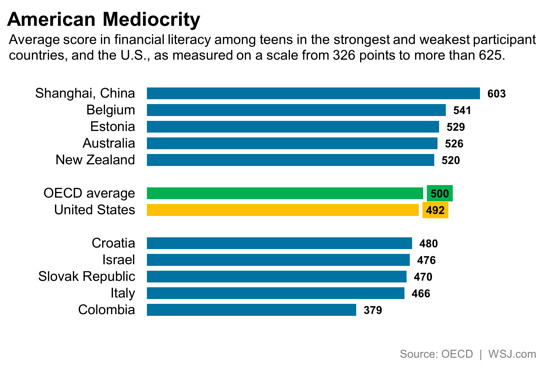 When it comes to financial literacy around the world, American teens are middling.

The United States may fuel the world’s largest economy and operate its most robust financial system. But compared to the financial prowess of teenagers in 17 other countries, U.S. teens come off downright mediocre.

That’s according to a new study published Wednesday by the Organization for Economic Cooperation and Development as part of its Program for International Student Assessment, conducted once every three years.

The OECD, a 34-nation organization based in Paris, surveyed 15-year-old students in 13 member nations and five other nations throughout 2012 to ascertain their level of familiarity with the financial system as they neared adulthood.

“Finance is part of everyday life for many 15-year-olds, who are already consumers of financial services, such as bank accounts,” the report said. “As they near the end of compulsory education, students will face complex and challenging financial choices, including whether to join the labor market or continue with formal education and, if so, how to finance such study.”

The survey questions assessed the teens’ understanding of bank accounts, credit cards, taxes, savings and contracts — among other topics.

Teens in Shanghai, China, proved the most financially literate of the countries surveyed with a mean test score of 603; Colombia rounded out the bottom of the ranking with an average test score of 379.

American teens scored an average of 492 points — placing them ninth in the ranking, exactly in the middle of the pack.

The report’s authors concluded that nations like the United States would benefit from standardizing financial instruction in public schools, especially high schools.

But Jim Peniston, executive director of the Foundation for Financial Planning in Atlanta, said he expects that nations scoring higher than the U.S. place more societal emphasis on saving money.

He maintained, unlike the report’s authors, that increasing funding for school-based financial literacy programs would be a mistake. The essentials of financial planning — how to save, when to donate money to charity — are values instilled through family, he said.

“I don’t put it on the school system, I put it on our generation,” Mr. Peniston said. “What do kids learn? They learn from what they see at home.”

Five other findings from the OECD report:

Wondering what it means to be financially literate? Try your hand at a few sample questions from the survey.