Americans Are Saving More, But for How Much Longer? – Real Time Economics 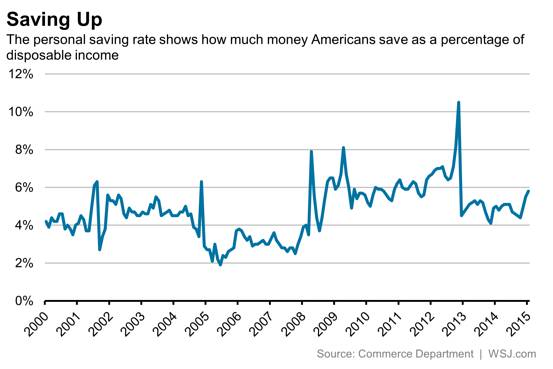 Americans are squirreling away most of the money they’re getting from slowly rising incomes and cheaper gasoline.

The personal saving rate rose to 5.8% in February, the highest level in more than two years, the Commerce Department said Monday.

The rate measures the percentage of disposable income Americans don’t spend. In absolute dollar terms, the figure was a seasonally adjusted $768.6 billion, also the highest level since December 2012–when new taxes set for 2013 skewed the numbers.  As recently as November, the rate was only 4.4%.

The latest saving figures suggest households have been cautious, opting to build up their rainy-day funds. Consumer spending during February rose a weak 0.1% while disposable incomes–personal income after taxes–advanced 0.4%.

“In short, after years of spending as if there were no tomorrow, consumers are now saving like there is a tomorrow,” Richard Moody, chief economist at Regions Financial Corp., said in a note to clients. “What is unclear, however, is how long this will remain the case.”

Indeed, spending may have slowed while parts of the country were socked in by bad winter weather. If that’s the case, there could be a spring rebound.

“Households are likely to draw the saving rate lower to support consumption in the coming months,” Michael Gapen, economist at Barclays, said in a note to clients.

One other note: The data are periodically revised, sometimes heavily. Figures last year showed the personal saving rate climbing from 4.8% in March to 5.6% in September, which would have been the highest rate in nearly two years.

But fresher data erased a big chunk of that money. Now, Commerce estimates the personal saving rate peaked last year at 5.1%, fell to 4.6% in September and hit a low of 4.4% in November. That corresponds with solid growth in personal spending–U.S. consumers on the fourth quarter spent at the fastest pace since 2006.

U.S. Consumer Spending Up 0.1% in February