If you measure the strength of the economy by how much people spend, then the new report from the Department of Labor on consumer expenditures is bad news.

Consumers cut spending in 2013 as their incomes fell, according to Tuesday’s report, and that included less spending for most of the major categories tracked by the Consumer Expenditure Survey. 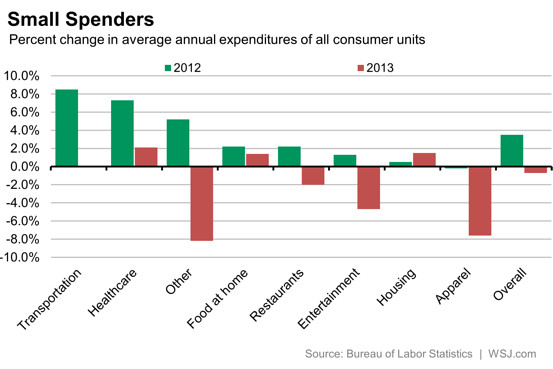 After climbing by 3.5% in 2012, overall spending fell 0.7% last year. Spending dropped 7.6% on apparel and by 4.7% on entertainment. Decreases were also recorded for alcoholic beverages, personal care products and restaurants.

Meanwhile, spending continued to increase for health care and housing. Housing was the only major category to increase more quickly in 2013 than in 2012.

The data paint a grim picture of the health of the American consumer, with the average “consumer unit” (which includes families, single persons living alone, or couples who share expenses) reporting less income in 2013 than 2012.  The data also add to evidence that many Americans are being squeezed by rising costs of health care and housing. 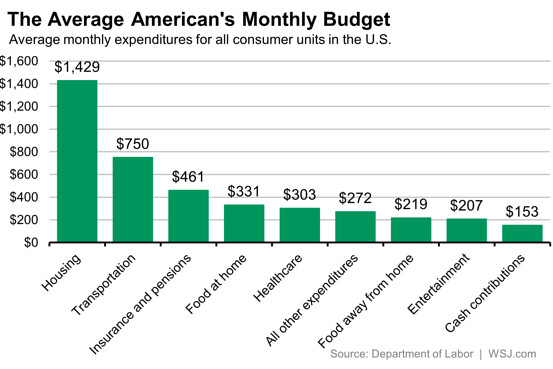 The squeeze is painful for consumers and also for charities and religious organizations, according to the survey. Donations declined by 9.1% to charities and 4.8% to churches in 2013.

But for many Americans, the report underscores trends that are by now well known: Incomes are stagnating for many workers as the job market operates at diminished capacity, and even if overall inflation is low, the costs of life’s necessities continue to climb.