An Updated Look at the Beveridge Curve: A Step Away from Normal – Real Time Economics

The number of job openings climbed in April to the highest level since before the recession began, according to a Labor Department report this morning. That’s good news for the economy overall, as more job openings ought to mean more opportunities for the unemployed to find work or for people to find better jobs.

But it’s bad news for the Beveridge Curve. 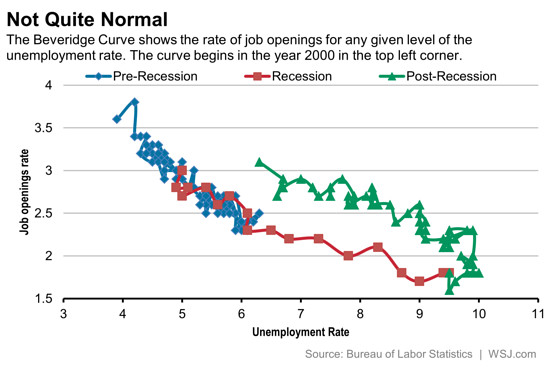 Real Time Economics has been tracking the progression of the Beveridge Curve, named after the economist William Henry Beveridge, that tracks the relationship between the job openings rate and the unemployment rate.

Before the recession hit in December 2007, the relationship between job openings and unemployment held steady. If job openings climbed, the unemployment rate tended to fall, as one would expect (the blue line in the accompanying chart).

During the recession, the unemployment rate soared toward 10%, and the availability of job openings plummeted (the red line). Then, in the recovery, something strange happened. The openings rate began to climb, yet unemployment remained stubbornly high. The new job listings were not being filled by the vast number of unemployed workers (the green line).

The data on job openings comes from the Labor Department’s survey on job openings and labor turnover, known as JOLTS. Unfortunately, the monthly data only go back to 2000.

With so many jobs available, more people ought to be finding their way to work. An openings rate above 3% has historically meant that the unemployment rate was below 5%, more than a full percentage point away from where it sits today. The curve has not healed to where it was before the recession.

Why are job openings not doing more to reduce unemployment? One reason may be that large recessions often disrupt the traditional relationship between openings and unemployment, and that with time this will heal. After all, the relationship appears significantly closer to normal today than it did at the end of the recession in 2009.

But another school of thought says that some unemployed workers may lack the skills to assume the openings or, put another way, that employers are unwilling to train applicants so that they can fill the available roles. This suggests the economy may have suffered at least some structural damage that will take longer than normal to heal.