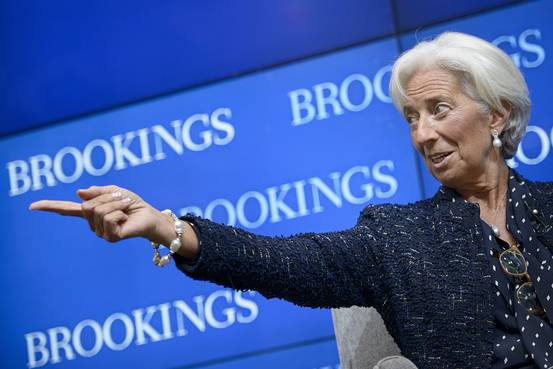 Weak global growth will prove a major frustration to new efforts by the United Nations to lift the world’s poorest people out of poverty, the head of the International Monetary Fund warned Tuesday.

On Friday, the United Nations will adopt a list of 17 new development goals meant to eradicate poverty and hunger across the globe by 2030.

But unlike the last decade and a half, when breakneck growth in emerging market catapulted hundreds of millions of people out of hardship, a souring of economic prospects worldwide will make the new targets much harder to achieve, said IMF Managing Director Christine Lagarde.

“The outcome of the exercise will not be as massive as we have seen with the millennium development goals,” Ms. Lagarde said, referring to earlier U.N. efforts. The number of people living in extreme poverty has fallen by more than half to 836 million people since 1990, with most of the progress seen since 2000 when economic growth in China and other large developing countries nearly doubled.

But declining population growth, dwindling gains in productivity and the inability of many countries to overhaul their economies are putting the global economy into a long-term low-growth rut.

The IMF is downgrading its global growth forecasts, due to be published early next month, as China’s faster-than-expected economic deceleration ripples through the world economy.

“The downside risks are greater,” Ms. Lagarde said, pointing to three signs of a worsening outlook. Global trade, which used to increase at almost double the rate of global growth, is struggling to match the rate of economic expansion. Eight years after the financial crisis shook the global economy, there are nearly 200 million people still officially searching for work, up nearly 6% from precrisis levels. And the amount of economic growth that increased productivity can generate is shrinking in emerging market economies.

Weak growth prospects have added to the difficulties authorities face in trying to enact the policies the IMF and others say are necessary to revive growth prospects. (In fact, IMF’s outgoing chief economist Olivier Blanchard warned it could fuel “extremely dangerous” political instability.)

Anemic growth will likely hinder efforts by the U.N. and government officials to roll out some of the policy prescriptions the IMF says are critical to help meet the new development goals.

“That is going to be a challenge, there is no doubt about it,” Ms. Lagarde said at an Brookings Institution event.

Many developing nations rely heavily on demand for a small handful of exports, leaving them vulnerable to volatile price swings that can wreak havoc on their economies. Liberia’s reliance on iron ore and rubber exports to China, for example, means that plummeting commodity prices are adding to the country’s economic woes just as it tries to recover from the deadly Ebola epidemic and years of civil war.

Economies that also foment inequalities–whether between men and women, income brackets or across ethnic divisions–are also constraining their growth potential, the IMF argues. Smashing the legal and cultural barriers that prevent women from accessing finance, owning property or earning equitable wages for their labor could slingshot growth prospects upward, the fund says.

And retooling economies for more sustainable use of resources has the potential to boost long-term growth and can subsequently foster stronger private-sector investment. Energy subsidies, especially for those who can afford market-priced fuel, have been a substantial drain on state budgets, siphoning off cash that would be used to strengthen health care, infrastructure or education. The fund estimates there are trillions in hidden fossil fuel costs. More efficient pricing of water could prevent resource shortages and price spikes that can hobble economies, not to mention bolstering infrastructure that could benefit the poorest, which would then fuel stronger growth.

The problem is that making such foundational policy overhauls often requires challenging entrenched interests that have hefty political leverage. Members of the Group of 20 largest economies, for example, are struggling to implement their own growth-spurring policy targets, as ambitious goals meet the realities of domestic politics.

If the world’s most powerful economies can’t revive growth prospects, it may be an ill omen for new development goals for the world’s poorest.