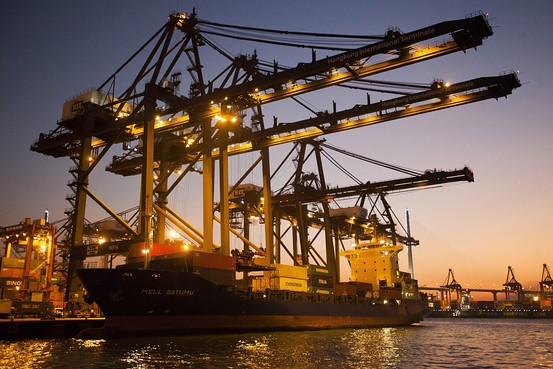 A weaker euro and yen are pushing down prices of imports in Asia. Here, shipping containers in Hong Kong.
European Pressphoto Agency

Falling oil prices are exacerbating low inflation across Asia but there’s yet another culprit: currency strength.

True, most currencies in Asia are weaker against a resurgent dollar. Still, many have strengthened against the euro and the yen, which have fallen amid a recent spate of dismal economic data and easing measures.

East Asia buys a large amount of goods from Europe and Japan, so this is making imports cheaper and adding to downward pressures on prices. DBS economist David Carbon thinks strengthening currencies could have an even bigger impact on inflation than falling crude prices.

Asia’s imports comprise 20% to 35% of gross domestic product, while imports of crude oil make up 1% to 6%, he says. “When you do the math, strong currencies are just as important a driver of low inflation as oil.”

Asia is now importing more from Europe and Japan than from the U.S., so local currency strength against the weakening euro and yen is having an outsize effect on prices. Asia’s imports from Europe in the final months of last year were more than 40% higher than those from the U.S. in dollar terms—and from Japan, roughly 10% higher, according to data from HSCB Holdings PLC. 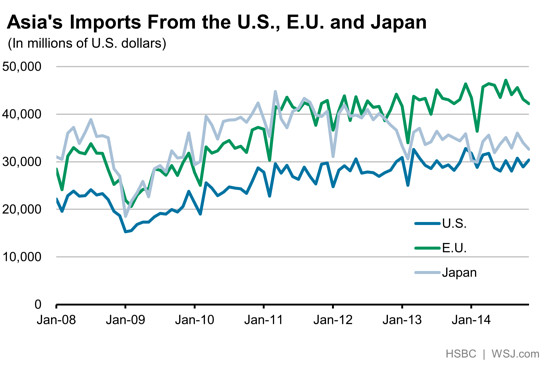 Given worries over deflation across the region, central banks should be happy to see currency devaluation, which would give a lift to exports. But as always, there are other concerns at work.

In China, authorities fear a weak yuan would spur capital outflows as investors lose confidence, particularly as the U.S. prepares to raise interest rates. A signal of this trend: China’s banks posted net sales of foreign exchange in January. That’s also a reason the central bank appears to have been intervening to keep the currency strong, even against the dollar. China’s reserves have fallen by about $150 billion since mid-2014 and the yuan has appreciated more than 10% against a triple-currency basket of U.S. dollars, euros and yen, according to DBS.

A stronger yuan also would give consumers more local spending power. That’s a bigger priority for the central bank than propping up China’s shrinking export economy, says HSBC economist Fred Neumann. The share of exports as a portion of GDP has fallen by a third over the past decade to 26%, he says, adding that competitive pricing from a weaker yuan may help exporters’ profit margins, but isn’t enough to rouse overseas demand.

In Thailand, the baht’s appreciation, by 10% against the triple-currency basket, spurred local business groups pinched by waning competitiveness to campaign for central bank intervention. Thailand’s foreign reserves have fallen by $10 billion over the past six months.

An average of 10 Asian currencies has risen about 7% against the triple-currency basket over the past six months, according to data from DBS. Foreign currency reserves have fallen over that same period in many of those countries: China, Singapore, Malaysia, Thailand, Taiwan, Korea and the Philippines.

Still, others hesitate to assign too much importance to the currency factor.

Currency moves “are of secondary importance,” says ING economist Tim Condon. Weak demand is sapping saps firms’ wiggle room to raise prices. Add to that falling oil–which has slashed prices of other commodities and food–and a pretty clear picture emerges for the cause of Asia’s deflationary pressure.