Taiwan has long been home to many of Apple ‘s key suppliers. 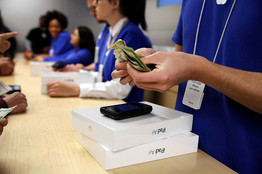 But is the iPhone maker’s business really big enough to move the needle on Taiwan’s economic data?

It appears the answer is yes, with economists recently raising their forecasts of Taiwan’s GDP on upbeat sales prospects for Apple’s upcoming new iPhones.

Credit Suisse revised up its full-year estimate last month to 3.4% from 3.2% partly on iPhone expectations. Taiwan’s Ta Chong Bank did similarly, raising its second quarter GDP forecast to 3.75% from 3% after confirming more Taiwanese companies in the upcoming iPhones’ supply chain.

Taiwanese suppliers collectively get around $100 to $150 from Apple for each iPhone or iPad, Randy Abrams, an analyst at Credit Suisse estimates. That includes a range of components and the final assembly by a contract manufacturer such as Foxconn or Pegatron. An Apple spokeswoman did not respond to a request for comment. Foxconn and Pegatron also declined to comment.

With Apple estimated to sell 179.3 million iPhones this year, according to Credit Suisse, this would translate to $17.9 billion to $26.9 billion in revenue for Taiwan’s firms.

While Abrams cautions these are rough estimates, it suggests the scale Apple’s impact on Taiwan’s economy.

Taiwan’s 2013 gross national product was $499.8 trillion, so this would translate to Apple making up around 3.6% to 5.4% of the country’s GNP, a measure that includes offshore production by Foxconn and other suppliers.

Apple’s contribution to Taiwan’s GDP is much smaller, as GDP doesn’t include offshore production. Many Taiwanese firms, including all of Apple’s mobile product assemblers and many of its Taiwanese component makers, have moved their factories to China to save cost.

To be sure, it remains to be seen how long Apple’s sales boom will help Taiwan grow.

Credit Suisse forecasts that the total combined units of Apple products sold (including iPhones, iPads, iPod touches and Apple TV units) will decrease next year for the first time, sliding 1% from this year.

Apple’s total units sold will grow 5% this year, the bank predicts, slowing from 9% growth in 2013, 46% growth the year before, and triple digit percentage increases two years before that. The year-over-year slowdown is due to the high-end smartphone market getting more saturated and as Apple faces stronger competition from Android device makers.