Are Americans Working Less Than the Rest of the World? 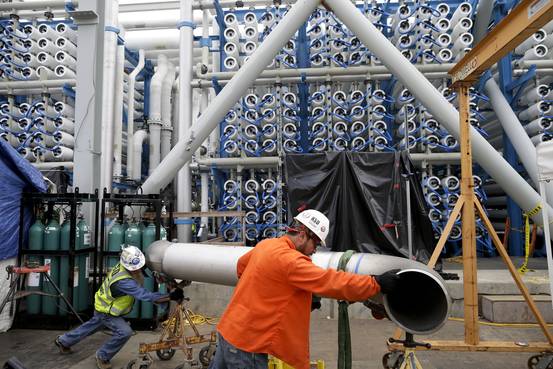 Workers move a pipe at a desalination plant in California.
GREGORY BULL/ASSOCIATED PRESS

A recent flap between presidential candidates Jeb Bush and Hillary Clinton raised the question: Do Americans work too little?

Mr. Bush, the former Republican governor of Florida, told a New Hampshire newspaper that for the U.S. to achieve 4% annual economic growth, something last achieved in 2000, “Workforce participation has to rise from its all-time modern lows….People need to work longer hours and, through their productivity, gain more income for their families.”

That led Democratic candidates to fire back. Mrs. Clinton said Americans have increased their productivity faster than their wages, sharing a chart from the left-leaning Economic Policy Institute. Sen. Bernie Sanders (I., Vt.) said on Twitter that “Americans already work the longest hours in the western industrialized world.” Sen. Sanders didn’t site a source for his statement.

So how do U.S. workers’ hours stack up? They’re about average.

Here’s how average hours worked annually per worker, labor-force participation rates and change in gross domestic product compared among a group of advanced economies  in 2013:

Americans work less than employees in Mexico or South Korea, but more than those in Germany and France.

In 2013, the average U.S. worker logged 1,778 hours, just ahead of the mean among workers in countries that are members of the Organization for Economic Cooperation and Development, a group of 34 advanced economies.

Another factor is the share of the population that’s working. Mr. Bush’s assertion matches with Labor Department data showing labor-force participation is at its lowest level since the 1970s.

But globally, America is again about average, though the rate is trending down faster than other countries. The U.S.’s 63.2% labor-force participation rate in 2013 ranked just above the middle among industrialized countries. The OEDC average was 60.1%.

In Greece, the average worker logs 2,060 hours, third-most among countries for which data is available. But barely half of Greek adults are in the labor force.

In countries such as Mexico, South Korea and Chile, workers log more than 2,000 hours a year—or almost 40 hours a week on average. But wages in those countries are relatively low compared with the United States and Western Europe.

In Germany, employees work the least total hours a year, according to the OECD. That likely reflects more generous leave policies. German workers received a mandatory 20 days of paid vacation and 10 paid holidays, according to Center for Economic and Policy Research.

Italy is the only tracked country where less than half of adults are working or seeking jobs, and the ones that do work clock only about 33 hours a week.

Bush, Clinton Spar on Twitter Over Remarks on Workers

The U.S. Stands Out on Labor Force Participation Rates

The June Jobs Report in 10 Charts

As Much as a Third of Discouraged Workers Might Return