Are Entry-Level Homebuyers Really This Gung-Ho Yet? – Real Time Economics 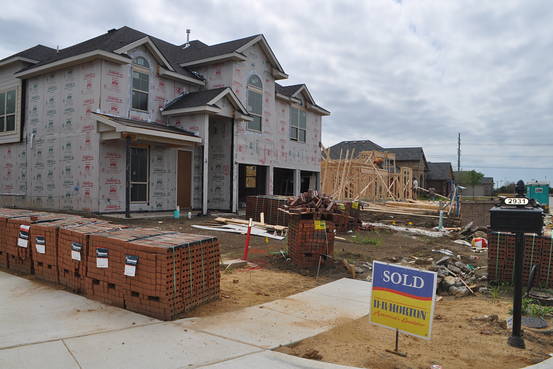 Sales of D.R. Horton Inc.’s entry-level Express Homes have tripled in the brand’s first year, a sign that first-time buyers are returning to the market.

D.R. Horton sold roughly 2,000 Express brand homes in the first three months of 2015, or 18% of its total sales, according to the company’s second quarter fiscal results released Wednesday. That’s big, considering that D.R. Horton is the largest U.S. builder by unit sales.

Overall, D.R. Horton sold a total of 11,135 units across its spectrum of brands, a 30% gain from the first three months of 2014. The Express brand homes sell for an average price of $179,000 compared with D.R. Horton’s overall average selling price of $284,400 last quarter. In comparison, the average price of all newly built U.S. homes sold in February was $341,000, according to the Commerce Department.

“There seems to be a lot of talk about the lack of the first-time buyer coming back into the market,” D.R. Horton Chief Executive David Auld said Wednesday on a conference call with investors. “That’s certainly not something that we’re seeing. Where we have been able to put product on the ground, we have found buyers.”

D.R. Horton’s results come amid other signs this spring that entry-level buyers are re-emerging, emboldened by a year of strong job growth, early signs of wage growth and a slow loosening of credit standards.

That cheers some analysts and economists who argue that a return of entry-level buyers is critical for the home-building industry to expand much beyond its current, restrained output. The 436,000 homes that builders sold last year amounted to 58% of the annual average since 2000, at least partly because many entry-level buyers had previously remained sidelined by recent years of slow job growth, tepid wage growth and strict mortgage-qualification standards.

The strength of the housing recovery isn’t yet clear. Many separate indicators show that the return of entry-level buyers is much more gradual that D.R. Horton’s sales indicate.

The National Association of Realtors’ report on Wednesday of March sales of existing homes found that first-time buyers accounted for an estimated 30% of sales in March, flat with the year-ago percentage. That’s below the traditional share of roughly 40%.

Granted, the March figure is a steady 30% for first-timers of an increasingly larger pie, given that total resales increased by 10.4% on a year-over-year basis. But it’s still not a breakneck expansion.

“This is definitely the early stage of some sort of purchase market growth” for the entry level, said Joel Kan, the Mortgage Bankers Association’s associate vice president of industry surveys and forecasting. “We’re not going to see things boom. I think it’s going to be more of a gradual increase throughout the year.”

So, how to explain D.R. Horton’s big gains in entry-level sales? Some say it’s partly because D.R. Horton is a very big fish in the sparsely populated pond of entry-level home construction.

“They are still virtually alone in aggressively going after that business,” said Stephen Kim, managing director at Barclays Equity Research, tracking home builders and building supply companies. “I do think the entry-level buyer is coming back. But I wouldn’t look at a tripling of Horton’s (Express) results and say that the (entry-level ) market has tripled.”

New-Home Prices Are on Fire

Take a Broader View to Better Understand the New-Home Market