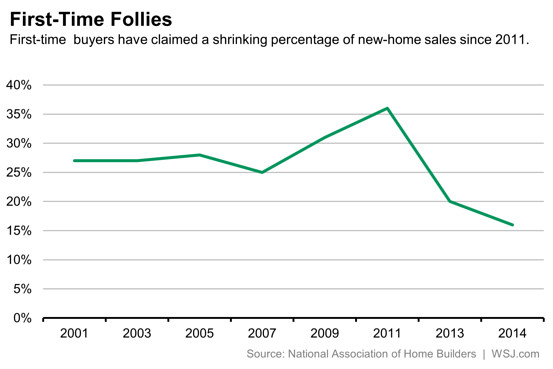 Stuart Miller sounds like a home builder who doesn’t expect first-time and entry-level buyers to surge back into the housing market any time soon. In fact, he is considering expanding into building homes for rent if first timers remain largely unable to buy.

“We think it’s going to be a slow, at-the-margin adjustment that’s going to take place over time,” Mr. Miller said on Lennar’s call to discuss its results for its fiscal second quarter ended May 31. “On the negative side, it means it’s going to be really difficult to really liberate the first-time buyer and get them back into the market.”

Meanwhile, a no-less-significant shift might occur. In response to a question from an analyst, Mr. Miller said on the call that Lennar is “considering” expanding into building homes intended for rent. That will depend, he said, on how long first-time buyers are stymied by stringent mortgage-qualification standards. If those would-be buyers are forced to turn to renting, Lennar is studying whether to start building single-family homes for them to rent in addition to the apartments it already constructs.

If first-timers remain unable to buy, then “single family development for rent might become a part of our portfolio going forward,” Mr. Miller said.

Those comments reverberated within the housing market on Thursday. Several big investors, including Blackstone Group LP and Colony Capital, already are in the business of buying existing single-family homes to rent them out. But, so far, only a handful of small, closely held builders have constructed homes exclusively for rent.

Lennar can bring to the home-rental industry its know-how of constructing single-family homes and its experience in managing rentals from its fledgling apartment division. Yet, entering new business lines takes time for any builder.

“They’d be well-equipped to do this,” said John Burns, CEO of housing consulting and research firm John Burns Real Estate Consulting Inc. “But I don’t think it’s going to be a huge business for them over the next two or three years.”

Ivy Zelman, CEO of housing market consulting and research firm Zelman & Associates, said it’s unlikely that big builders will move into constructing single-family homes for rent. “The opportunity is pretty significant in for-sale,” she said. “I think that’s where they’ll remain, where they have the expertise. It’s a completely different business managing tenants.”

The eventual return of entry-level and first-time buyers is a pivotal domino that must fall for the housing market to regain its traditional levels of output and make a significant contribution to gross domestic product. But many housing experts, including Mr. Miller, don’t foresee that happening soon.

The lack of first-time buyers is a leading factor holding back U.S. single-family home construction, which is trending this year at about 60% of its annual average since 2000 and only marginally greater than last year’s pace at this point. According to the National Association of Home Builders, first-time buyers have accounted for only 16% of new-home sales so far this year, as opposed to 25% to 28% from 2001 to 2007.

For now, Lennar and other builders remain content to focus on selling expensive houses to credit-worthy buyers seeking their second- or third-generation home. Many builders have achieved their desired profit margins in the past two years by selling fewer homes, as long as those homes are pricey. A shift to producing more homes at cheaper prices won’t happen until first-time buyers can land mortgages, many say.

“We’re focused on a current basis on the deepest, thickest part of the market, which is the first move-up and regular move-up buyer,” Mr. Miller said. “We stand ready to address the first-time buyer as they are activated.”

Lennar, based in Miami, posted results for its fiscal second quarter ended May 31 that generally pleased investors. It registered 6,183 sales contracts in the quarter, up 8% from a year earlier. Its revenue of $1.8 billion was up 27% from a year earlier and its net income of $137.7 million was flat.