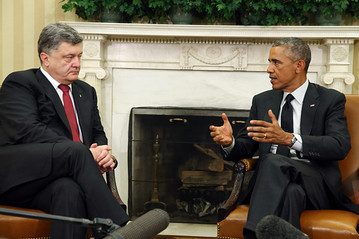 Before the U.S., Europe and International Monetary Fund  fork over billions of dollars more to help Ukraine plug a growing hole in the country’s finances, they want to ensure they won’t be throwing good money after bad.

That’s likely one of the key reasons David Lipton, the IMF’s No.2 official and former top White House economic adviser, is heading to Kiev this week.

Mr. Lipton, a veteran crisis fighter who has worked to douse financial fires in Latin America, Asia and Eastern Europe, will likely try to gauge how committed President Petro Poroshenko’s new cabinet is to overhauling the country’s bloated budget and broken economy.

His visit comes as the U.S. and other Group of Seven industrialized nations consider a new financing package for Kiev and as the IMF warns the country needs roughly $15 billion more through early 2016 to stave off bankruptcy. An IMF team is already on the ground negotiating the terms of an expanded bailout and evaluating the country’s precise cash needs. The IMF’s latest estimate is on top of the $30 billion already promised from international creditors, including the fund’s own $17 billion program.

When the IMF signed off on the bailout early this year, it was already one of the fund’s riskiest programs. That’s why the fund was only willing to contribute roughly half of the needed financing at the time.

A day after the IMF gave the green light on the deal, IMF Managing Director Christine Lagarde warned that additional cash would likely be needed, indicating that other creditors, largely Europe, should cover any shortfalls. “To assume that the additional funding will have to come from the IMF, I think is rather far-fetched,” Ms. Lagarde said again in October.

Outside economists warned that the fund would likely ultimately have to orchestrate a restructuring of the country’s debt, such as through an extension of bond payback periods or lowering interest rates.

And that was in the spring, before the war against Russian-backed separatists shut down or damaged much of the country’s infrastructure and manufacturing capacity in the east, the currency plummeted 25% further, emergency reserves dwindled to critically low levels, tax revenues contracted and the economy fell deeper into recession.

Although U.S. and IMF officials say the current government in Ukraine has shown a commitment to policy overhauls not seen in previous administrations, the fund is still wary of getting burned again. The country has twice backed out of previous bailout programs. That’s why the U.S. and Europe have made any financing contingent on a smooth-running IMF bailout program and the IMF has required Kiev implement a number of key policies before opening up its credit line to the country.

In order to put the country’s finances back into the black, Ukraine’s leadership is having to take painful and politically controversial measures that cut spending, raise taxes and hike energy bills to market rates.

It’s a delicate political navigation: The U.S. and Europe want to ensure that the country returns to health, is able to pay back its debt, is restructured for long-term growth and is pulled out of its historical client-state orbit around Russia’s Kremlin. The West wants to help cement the power of the fragile new government while also ensuring the country doesn’t repeat the economic and political missteps that helped spark the current turmoil.

It’s still unclear where the additional financing will come from. IMF spokesman William Murray wouldn’t say Thursday whether fund officials have changed their minds and have now been persuaded to take on more risk by expanding their credit line to Ukraine. But he indicated that at least some of the country’s financing gap should be filled by other creditors.

“It’s really important that the donor community step up and provide financing to the Ukraine,” Mr. Murray said. He also reiterated that the IMF needs to ensure that the country is fully financed for the next year before it can release the next tranche of cash for Ukraine, indicating creditors will need to commit to covering any shortfall.

So far, G-7 countries are talking about a $4 billion short-term package, $2 billion of which would be financed by Europe. U.S. lawmakers are also planning to authorize additional cash that could guarantee $1 billion more in Ukrainian bonds. But that ostensibly still leaves a funding gap of several billion dollars that would either have to be covered, such as through an expanded IMF program or a debt restructuring.