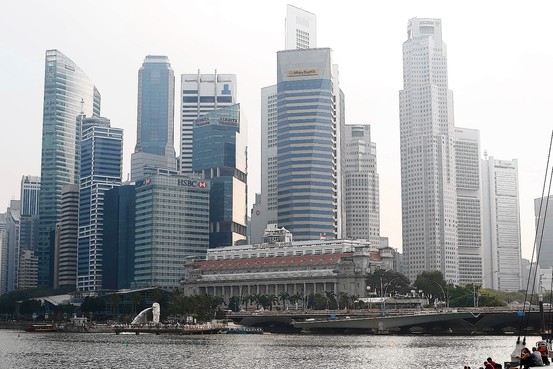 Asian banks are finding deposits harder to come by, posing a risk to economies increasingly dependent on credit for growth.

Year-on-year growth in monthly deposits at banks in Asia — excluding China and Japan — has slowed in the past six months from above 12% to 10%, said HSBC ’s co-head of Asian economic research, Frederic Neumann.

Banks in Asia typically offer deposit rates only slightly better – or sometimes below — the rate of inflation, which economists blame for a tendency among the region’s savers to invest heavily in property and other riskier investments.

“Part of the explanation might be that depositors are finding more rewarding opportunities for their cash, such as equity, property, or, in some cases, shadow bank products,” Mr. Neumann writes in a note to clients.

With China’s deposit rates fixed at 3.3% and inflation at 2.3%, for example, investors in China have piled 12.65 trillion yuan ($2.04 trillion) into wealth-management products promising to pay around 5% a year on average. Many help fund projects economists worry may never yield such returns, including local government infrastructure or projects and property developments.

In several Asian countries, deposit growth is no longer keeping pace with new lending. Bank credit has been climbing relative to gross domestic product since the global financial crisis, with HSBC estimating that the pace of credit growth relative to GDP growth rose last year to new highs in every country but Taiwan. As a result, bank credit in Asia excluding Japan now exceeds the combined size of the region’s GDP, according to the bank. 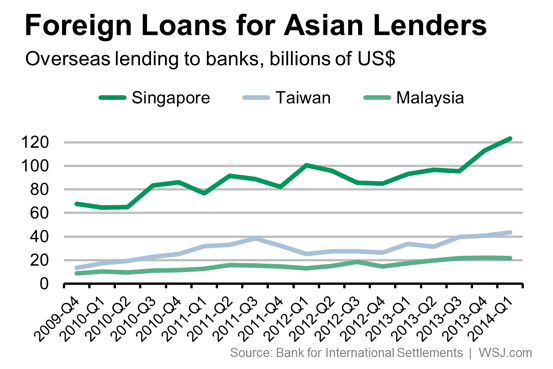 The risk is that banks in these countries have to cut lending to ensure potential defaults wouldn’t leave them short of cash to pay depositors. Such a pullback in credit could potentially hurt growth in economies that since 2011 have become increasingly reliant on credit for growth, especially on loans from banks.

Alternatively, Asian banks could keep lending but compensate for slower deposit growth by borrowing overseas. That would expose them to the risk of falling local currencies or a rise in global interest rates.

That’s what appears to be happening in Singapore, where deposits were flat in June even as bank loans swelled by 12%, pushing the overall loan-to-deposit ratio at banks in Singapore to 112%, up from 99% in June, 2013.

Chua Hak Bin, an economist in Singapore at Bank of America Merrill Lynch, said foreign banks in Singapore have borne the brunt of the domestic deposit slowdown, and have responded by looking offshore to fund local loan growth. Singapore’s three largest domestic banks, which can count on retail deposits from Singaporeans, still have average loan-to-deposit ratios of 82%.

Mr. Chua said most of the offshore borrowing by foreign bank branches was being used to offer exporters and importers loans denominated in Singapore’s dollar, which is pegged to a basket of currencies that include the U.S. dollar.