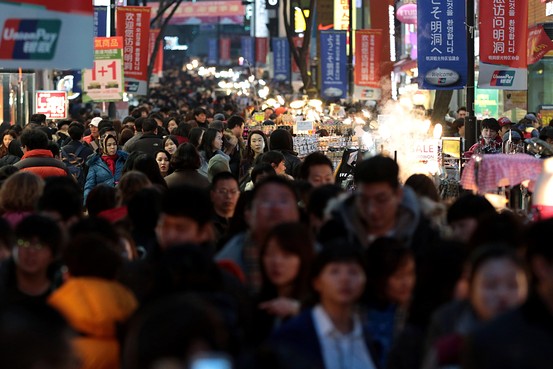 South Korea’s household debt-to-income level stood at 144% at the end of the second quarter last year, higher than the U.S. before its subprime crisis. Pictured, shoppers in Seoul.
Bloomberg News

While slowing growth has given central banks across Asia room to cut rates, some are doing so timidly, fearing an even greater buildup in debt.

Two central banks are expected to keep rates steady when they meet this week, the Bank of Thailand on Wednesday and the Bank of Korea on Thursday.

But there’s a growing sense that policy makers are going to have to take bolder action to boost demand in the face of fast-decelerating economies. Some observers think the central banks, South Korea especially, could surprise with a rate cut.

“It is clear that Korea’s growth outlook has worsened,” said HSBC economist Ronald Man, who expects a quarter-percentage-point cut to 1.75%, in a note to clients. “The sooner the Bank of Korea lowers its policy rate, the sooner its benefits will transmit through the economy and support growth.”

There are reasons for caution. Both countries have high household debt levels, built up since the onset of the global financial crisis in 2007. As U.S. and European demand for Asia’s exports sagged, Asian governments came to rely more on credit to households and companies to fuel domestic demand.

McKinsey & Co., in a report last month, named Thailand and South Korea, along with Australia and Malaysia, as places where household debt levels may be unsustainable. 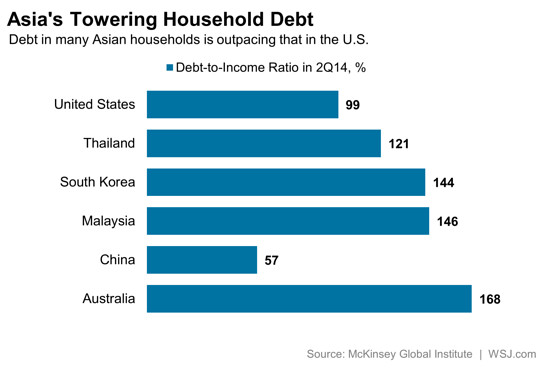 South Korea’s household debt-to-income level stood at 144% at the end of the second quarter last year, the latest data available. That’s higher than the U.S. before its subprime crisis.

Policy makers in South Korea are faced with a problem. Exports of electronics, automobiles and machinery still haven’t picked up, and growth is unlikely to break much above 3% this year for the fourth year in a row. Household spending has remained moribund, in part due to stagnant wages. The high debt overhang also is making consumers cautious.

The central bank cut rates twice last year to try to engender more local demand. The moves led to some increase in debt to purchase real estate, and house prices in Seoul, the capital, have begun to recover. But overall domestic spending has remained in the doldrums.

In Thailand, household debt grew strongly a few years ago as the government encouraged Thais to buy homes and cars. That has made it difficult for Thailand to cut rates, despite an economy that grew only 0.7% last year.

Some economists wonder whether further monetary easing will help, given the already-high debt levels. Others worry more credit could lead to defaults, which until now have remained low. Aggressive monetary easing also could leave countries exposed to capital outflows if the U.S. Federal Reserve raises its own rates later this year.

Others though, including Chetan Ahya at Morgan Stanley in Hong Kong, say central banks that so far have cut rates, from South Korea to India and China, have not been aggressive enough.

Mr. Ahya argues that consumer prices are falling or growing slowly in many places, which reflects a lack of demand. That has pushed up real interest rates, which take inflation into account, even after the recent monetary easing.

“The world’s got a deflation risk,” Mr. Ahya said.

More aggressive rate cuts would channel money to productive companies and financially sound households, while authorities should allow other debtors to go bankrupt, he added. That’s a big issue in China, where there’s been a large increase in corporate debt.

The Bank of Korea doesn’t want to tighten credit, which could lead to a fall in home prices. That would be a problem in a country where three-quarters of household assets are in real estate, much higher than a 25% share in the U.S., according to Standard Chartered.

A BOK official, talking on the condition of anonymity, said the bank would carry out an “accommodative monetary policy” given weak growth and low inflation. Consumer prices in February grew at their slowest pace in 15 years.

“However, the problem of household debt can’t be ignored,” the official said.

The minutes from the BOK’s February meeting, when the bank held rates steady at a record low 2%, showed at least one member believes there’s room for further cuts.