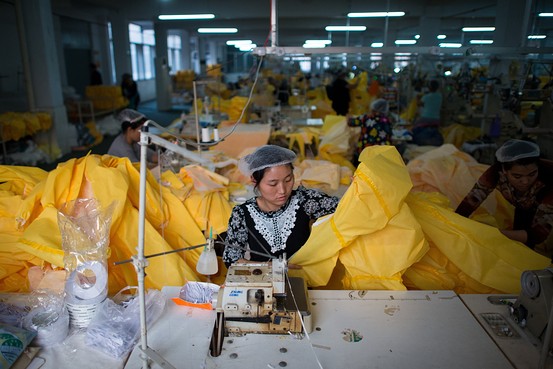 The data “suggests that the region’s manufacturers continue to struggle,” said Daniel Martin, a Singapore-based economist with Capital Economics, a research firm. In South Korea and Taiwan, “output appears to be stagnant at best.”

Two measures of factory activity weakened in China, with its official gauge falling to its lowest level since March, and a private reading by HSBC and research firm Markit hitting a six-month low.

China’s official PMI index fell to 50.3 in November from 50.8 in October. A reading above 50 indicates an expansion in manufacturing activity from the previous month, while a reading below indicates contraction.

Higher fuel prices and tepid demand pushed Indonesia’s HSBC PMI to a survey record low of 48.0 in November from 49.2 in October. Despite plummeting global oil prices, President Joko Widodo’s move to cut subsidies for fuel prices—part of his election pledge to free up funds for development projects—has raised the price of subsidized fuels by more than 30%. Higher fuel prices and a weak rupiah tacked on added input cost for manufacturers, and soft demand has given factories little leeway to pass those costs on to consumers.

Two readings of Taiwan’s manufacturing activity fell in November. Its HSBC PMI fell to 51.4 in November from 52.0 in October, and its official PMI fell below 50, in contractionary mode for the first time in two years.

While hot global demand for iPhones and gadgets has fired up exports of the island’s microprocessors—which helped third-quarter GDP score its strongest growth in almost two years—China’s slowdown has overshadowed any gains.

Taiwan’s local-election results this weekend also have cast doubt on the future of economic ties with China, its biggest trading partner. The defeat of Beijing-friendly Kuomintang could threaten the passage of trade pacts for goods and services that are still being negotiated. The stalled progress has some in Taiwan jittery, as South Korea has signed an outline of a free-trade deal with Beijing that would give its companies preferential access to China.

And while South Korea’s manufacturing gauge was one of the few to rise in November, the reading was the third straight below 50, signaling a continued pattern of subdued exports. Though demand in the U.S. is reawakening, that hasn’t been the case in other key export markets in Europe and China.

India was a rare bright spot. There, PMI rose to 53.3 from 51.6 in October, the 13th straight month of expansion, with strong demand both at home and abroad. But while Prime Minister Narendra Modi’s “Make in India” campaign has fueled a manufacturing push, any efforts to lower barriers to doing business have been slow, says Capital Economics’ India economist Shilan Shah.

“Until there is concrete sign of progress…the manufacturing sector looks set to remain a weak spot for some time to come,” he says.