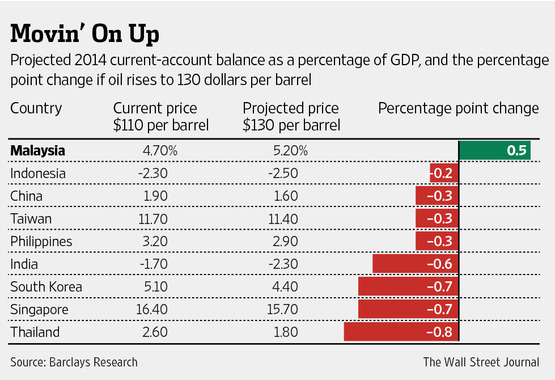 Brent crude hit $115 per barrel last week and the risk of a further rise can’t be discounted due to the deteriorating security situation in Iraq, which has large oil reserves and controls roughly 3% of global supplies, largely through its southern fields around Basra.

India, China and South Korea are among the Asian economies that rely heavily on oil from Iraq, but spillovers will affect the entire region, as Asia’s industrialized, exporting countries are large net importers of oil. Malaysia is the region’s only net exporter of energy commodities, making it a beneficiary of higher oil prices (note that we do not adjust our analysis for the possibility that demand could fall as oil prices rise).

The immediate impact of higher oil prices will be felt in current-account balances – and, against a backdrop of Fed tapering, persistently higher prices could create financing issues.

Even so, the resilience of Asia’s balance of payments has strengthened in recent years, along with the “brand premium” of many of the region’s exports. If oil averages $130 per barrel in the second half or the year, versus our base case of $110 per barrel, we estimate that the region’s cumulative current-account surplus would fall by $60 billion — to a still-hefty $293 billion.

The impact of higher oil prices across Asia is uneven. South Korea, Thailand, the Philippines and India would likely see the biggest negative impact on their current-account balances.

Singapore would also feel a big impact, but its large current-account surplus should insulate it from a balance-of-payments shock. Broadly speaking, current-account balances in Asia have improved over the past year and are likely to improve still more this year, even if oil prices rise significantly.    Furthermore, the stabilization in regional currencies over the past few months should provide some breathing space for most economies to adjust to higher oil prices, ensuring that consumers won’t feel a negative impact on growth right away.

If oil prices remain high, however, bigger challenges are likely to materialize next year – especially if extreme weather creates its own inflation issues. Again, we think Malaysia’s current-account balance would most likely benefit from sustained higher oil prices.

With the exception of India, Indonesia and Malaysia, no countries in the region subsidize fuel, which means the pass-through to retail inflation is very rapid. Fuel has the largest weighting in the consumer price indexes in India (9.5%), Malaysia (9.2%) and Thailand (8.0%), making them among the most sensitive to higher oil prices.

However, governments’ first response is likely to focus on administrative and fiscal measures that can temporarily absorb the impact of higher oil prices. If the price shock is sustained, we would expect the smaller, open economies with strong current-account surpluses to be biased toward stronger currencies that could lean into imported inflation as well.

Rahul Bajoria is regional economist for Asia-Pacific at Barclays