Officials at the White House and Commerce Department are publicly expressing worries that economic statistics surveys—in particular a critical survey at the Census Bureau known as the American Community Survey—face a growing risk of cuts.

“The risk is much higher than it has been,” Mark Doms, the undersecretary of Commerce for economic affairs, said at a conference in Washington this week.

Betsey Stevenson, one of three economists on the White House Council of Economic Advisers, said the data is critical because “public policy should be evidence-based.” Maintaining the quality of U.S. statistics is “the next great infrastructure challenge in the data age,” she said at the same gathering. 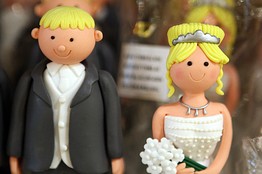 The Census Bureau’s American Community Survey has been “really the only place” to get data about Americans’ marital status, said Betsey Stevenson of the White House Council of Economic Advisers.
Getty Images

Agencies across Washington are under pressure to reduce their budgets. At the Commerce Department, the Census Bureau’s American Community Survey has emerged as a flash point. It reaches 3.5 million households annually to produce detailed demographic and economic statistics down to areas as small as census tracts and block groups. Prior to the ACS’s full launch in 2005, much of the nation’s demographic information was available only once every 10 years, with the decennial census.

But the ACS is expensive, representing more than 20% of the Census Bureau’s budget and more than a third of its staff in 2015. The Commerce Department requested $257 million dollars for the survey for fiscal year 2016. And—unlike almost every other survey—it’s mandatory. The Commerce Department is authorized by statute to fine people who do not respond. In practice, they don’t actually issue these fines, but the potential has rattled some survey respondents and some congressmen.

One member of Congress who has expressed concern is Rep. John Culberson (R., Texas), who chairs the appropriations subcommittee that allocates funding to the Commerce Department.

“I have a lot of constituents that are concerned about the American Community Survey, the intrusiveness of it in a lot of areas,” Mr. Culberson said at a March 3 hearing. “I’m a big believer in privacy and our most important right as Americans is to be left alone, which is why I’m concerned about the American Community Survey.”

His spokewoman expanded on his comments Friday.

“First and foremost, the congressman feels our greatest right as Americans is to be left alone,” Beth McGinn said. “He believes the survey is too long and would like to know if some of this information is available elsewhere within the government. If the government already has this information, they shouldn’t be asking people twice.

“He also believes technology has changed so much over the past 10 years that he’d like to see us try to incorporate some of the newer technologies into this process as the private-sector has done to look for cost-savings and efficiencies.”

For defenders of the survey, concerning omens have aligned: The relevant appropriator is skeptical of the survey. The pressure to cut budgets remains elevated. Distrust of the government has climbed. And the Senate is now controlled by Republicans.

Cutting the ACS was uniformly criticized in Washington this week at the conference of the National Association for Business Economics, a group of mostly private-sector economists.

“There’s a whole industry that uses ACS data to grow their economy,” said Patrick Jankowski, the head of research at the Greater Houston Partnership, the economic development group for Houston. The survey is the only source for recent data on small geographic areas that economic development groups use to help companies determine where to locate, he said. “The decennial census will not cut it,” Mr. Jankowski said, since regions can rapidly change over a 10-year period.

The White House’s Ms. Stevenson, in her presentation at NABE,  highlighted the way policy makers use the ACS. The report’s demographic estimates are used to allocate funding for many federal programs, and also widely used in public policy research, she said.

She noted that the Council of Economic Advisers has used the data to analyze whether efforts to encourage young people to study science, technology, engineering and mathematics were working. There’s “really not a lot of places you can get data over time on field of study,” she said. The survey is also a rich source of data on income polarization and immigration statistics and “really the only place” for information on marital status, she said.

Though Ms. Stevenson did not say as much, two of her examples highlight another source of cuts to the ACS. The Census Bureau itself has proposed ending its questions on field of study and marriage. Though the statistics are widely used by researchers, an internal review at the bureau determined the questions were  ”low benefit” and proposed cutting them last year. A period soliciting public comment on the proposed changes ended in December.

Mr. Doms, the undersecretary for Commerce, said that “no decisions have been made yet” to remove the questions that Ms. Stevenson identified as important.

Economic surveys become more valuable as they age because they allow for the relationships between economic measures to be studied over time. But with potential cuts to the data, whether from Congress or from within the Census Bureau, the ACS may never fully grow out of its adolescence.