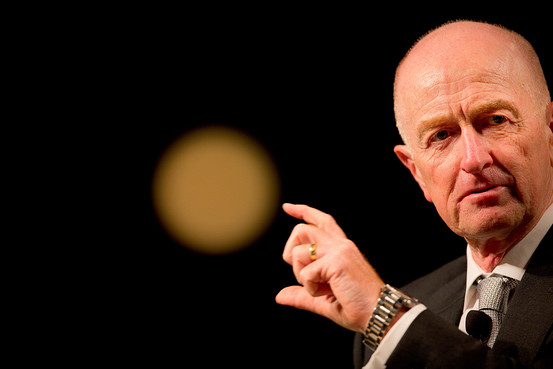 Australia’s central bank Governor Glenn Stevens Wednesday highlighted surging house price as a major risk for the economy – comments the markets took to all but rule out further cuts to interest rates.

Interest rate swap markets had been pricing in around a 30% chance of further monetary easing by the end of the year as the Reserve Bank of Australia moved to stall a recent sharp rise in unemployment. That market betting has now dropped to around 15%.

“While we may desire to see a faster reduction in the rate of unemployment, further inflating an already elevated level of housing prices seems an unwise route to try to achieve that,” Mr Stevens told a business audience in Adelaide.

The comments followed news Wednesday the economy slowed in the second quarter, growing by 0.5%, compared with 1.1% in the first quarter, cementing views that the economy is likely to remain soft for some time, offering little hope of a meaningful drop in unemployment throughout next year.

“The Governor has all but ruled out any further rate cuts,” Mr. Blythe said.

Stephen Walters, Chief Economist at JPMorgan said: ” Developments in housing loom large as a constraint on the RBA’s ability to provide further policy support. Until now, this was an open topic of debate.”

The RBA has held its cash rate target at a record low 2.5% for more than a year, supporting house prices. Competition between the banks and falling funding costs has seen mortgage lending rates drop to record lows in that time.

Mr. Stevens has been backing away from talk of further cuts for a few weeks now, recently suggesting that the “animal spirits” of business need to return and do their part in bolstering growth.

Australian house prices have risen by more than 10% in the past year, with Sydney and Melbourne outpacing the other main cities on the back of a jump in investor demand for property. Foreign investors are also chiming in to stoke the surge in prices, now running at their fastest pace in four years.

“We can observe that (corporate) leverage is mostly low, and probably lower than it was a decade ago in most instances…It also seems that holdings of cash have been increasing of late,” Mr. Stevens said.