SYDNEY—Australia’s central bank is likely to nudge its economic-growth forecasts lower, some economists say, as commodity-price falls continue to hurt the resource-rich economy with no offsetting currency declines to cushion the blow.

The increasing likelihood of a downgrade might also shift the balance of probability toward an interest-rate cut next month—even as some positive signals from the economy emerge.

The central bank’s growth forecasts for the next couple of years will be published on May 8. Its policy-making committee will get a sneak preview of the new numbers ahead of its May 5 rate decision.

As much as anybody else, the bank has been taken by surprise by the relentless falls in the iron-price to around US$50 per metric ton in recent weeks. As recently as the start of the year, the price was US$72. It’s hard to imagine it peaked at US$192 per ton in 2011.

The collapse in the iron-ore price is wiping billions from corporate profits, damping investment spending, and sapping government tax revenue. All of that will feed down to consumers in terms of their job security, income growth and rising cost of living.

Meanwhile, the Aussie dollar is little changed in trade-weighted terms this year. The Australian dollar TWI, which values the currency against a basket of other major ones, has fallen from 66.10 at the start of January to 62.70 now.

The reserve bank continues to describe the Aussie dollar as elevated and holding back a recovery.

Bill Evans, chief economist at Westpac, said he now expects a rate cut in May. “A lower Australian dollar is necessary to achieve the adjustment in the economy that will be required to provide some buffer to the huge fall in Australia’s export prices and the sharp decline in mining investment,” he said.

Kieran Davies, chief economist Barclays, Australia, said there was a “clear risk” the central bank’s GDP forecasts would be cut for the same sorts of reasons.

In February, the central bank surprised the financial markets by cutting rates by a quarter of a percentage point to a record-low 2.25% in the first move in 18 months It cited the absence of a recovery in economic growth despite a lengthy period of low interest rates.

The reserve bank has now had time to assess the impact of the February cut, and a similar story of flagging growth may well be used to justify lowering the cash rate target to 2.0%.

The reserve bank is looking for more evidence of investment growth outside the mining industry, as the economy winds down from a decadelong mining-investment spree. A parallel slowdown in China’s economy saw Australia’s annual GDP growth slow to about 2.5% last year—well short of what’s needed to bring down unemployment from near-decade highs.

Still, recent data has pointed to some improvement in job creation, rising consumer spending and a pick-up in core inflation. Those factors will combine to make the central bank’s next decision a tightly contested one.

Rob Mead, managing director at global bond investor PIMCO, said a May rate cut was therefore “no slam-dunk” scenario. But he said the recent good news on the economy wouldn’t be enough to outweigh the tidal wave of factors on the other side of the argument. 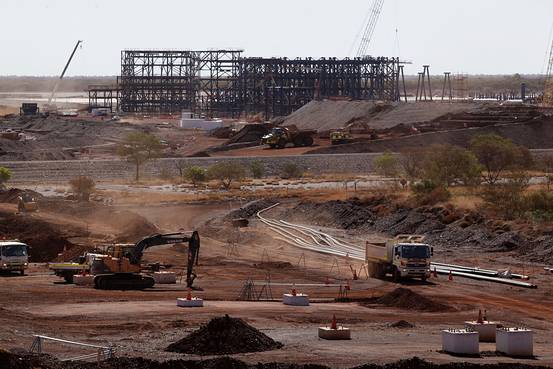 A water truck sprays water onto a mine pit at a facility under construction in Western Australia’s Pilbara region.
Bloomberg News