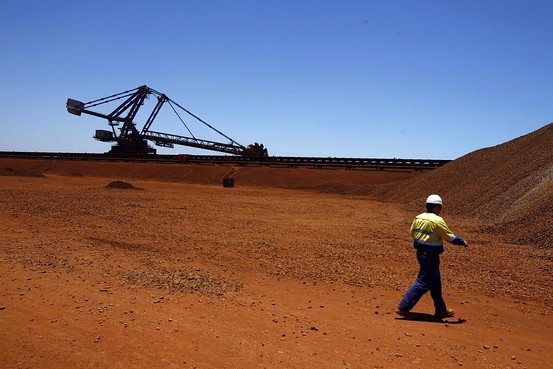 While that extreme measure has driven house prices to record highs in major cities, it’s doing little for the real economy.

The strong property boom had traders convinced the next move in interest rates would likely be up. Now, weak data due to the end of a mining boom and the government’s worry about a strong dollar has put a rate cut back on the table, some think.

Futures markets Wednesday were pricing in a near 50% likelihood that the next move in rates will be down by the first quarter of 2015.

“The market has swung to pricing in the risk of lower interest rates over the next six months or so, but we still think that the RBA will keep the cash rate on hold at 2.5% this year and raise them modestly next year as the economy improves,” said Kieran Davies, chief economist at Barclays in Australia.

Price pressures are complicating the picture. Consumer prices rose 0.5% in the second quarter from the first and were up 3.0% from a year earlier, the Australian Bureau of Statistics said Wednesday.

Core inflation, which strips out extraordinary events such as the price effects of extreme weather or new taxes, rose by an average of 0.7% on quarter, up from an expect rise of 0.6%. This measure rose 2.8% from a year earlier, putting it close to the top of the 2% to 3% band that RBA policymakers target.

That makes it harder to envisage a further cut taking place any time soon.
“The inflation outcomes are in line with the RBA’s recent forecasts and reinforce their message that what is required is a period of stability in interest rates,” said Michael Workman, an economist at Commonwealth Bank.

The slight upward surprise in the core inflation data – which could put off a rate cut – was enough to give the Australian dollar a strong boost, putting it back above US$0.9400, and lifting it to its highest levels in two weeks.

To be sure, any uneasiness about inflation is likely to be offset by evidence of weakness elsewhere in the economy, including retail sales and the country’s job market. Unemployment hovers around decade highs while consumers are outing off purchases.

Others say inflation is unlikely to be a long-term worry. The RBA is confident inflation won’t break through the upper limits of its trading band, largely because wage growth across the economy is now falling in real terms. The recent removal of a carbon tax by Parliament could also shave 0.7 percentage points off inflation in the third quarter, Deutsche Bank estimates.

Meanwhile, the Australian dollar, up 8% since January, remains elevated despite weakness in key commodity prices this year. A stronger local currency looks set to remain until the U.S. Federal Reserve begins to signal it is ready to start raising interest rates, unlikely before well into 2015.