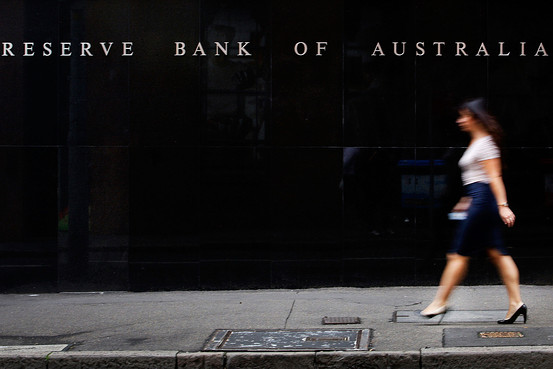 The Reserve Bank of Australia headquarters in Sydney.
Bloomberg News

Investors have increasingly been pricing in a rate cut in Australia, as the nation battles with lackluster economic data. But the central bank governor, Glenn Stevens, attempted to douse any such expectation on Wednesday.

Mr. Stevens said the central bank had done all it could to boost the economy—referring to a series of rates cuts to a record low 2.5%–and that now it was up to business to respond with “animal spirits.”

The central bank has cut rates eight times since late 2011. But the economy has failed to respond, as a drop in mining investment takes the heat out of a decadelong resources boom.

Aside from a buoyant property market and housing construction gaining some traction, many nonmining parts of the economy remain close to stagnant, as nervous consumers remain reluctant to open their wallets despite the lower borrowing costs.

In testimony before a parliamentary economics committee in Brisbane, Mr. Stevens suggested he’d done just about all he could within his policy mandate to support the economy. “I’ve allowed the horse to come to the water of cheaper funding. I can’t make it drink,” he said.

“Any plans for growth that might be in the top drawer (of business) remain hostage to uncertainty about the future pace of demand,” he added.

While not ruling out further rate cuts if they are needed, Mr. Stevens indicated a willingness to wait longer for the tonic of record-low interest rates to work their magic on the economy.

The governor said the elevated Australian dollar was also holding back the economy’s shift away from a reliance on mining investment to other sectors.

“The exchange rate, another channel through which monetary policy usually has an effect, is probably not doing as much as it might usually be expected to do in achieving balanced growth,” he said.

The outlook painted by Mr. Stevens suggests a further lengthy period ahead of low rates is likely, possibly for as long as another year.

“The hurdle for further easing remains high,” said Adam Boyton, chief economist at Deutsche Bank in Australia. Still, the on-hold stance may be tested within just a few weeks amid forecasts the economy may have slowed sharply in the second quarter.

Falling commodity prices, the high Australian dollar, and weak consumer sentiment likely eroded growth. And some economists say there is a chance the economy may have contracted in the quarter.

If weak growth data combines with another round of weak unemployment data in August, the central bank may yet be forced to rethink its neutral bias.

Unemployment rose to a 12-year-high of 6.4% in July, and the reserve bank this week said it expected no real improvement on the jobs front until 2016.

Mr. Stevens said the bank’s economic forecasts may eventually prove conservative, but admitted to being unsure of when any traction might be gained. “The frustrating thing is that no one can say when that will happen, or just what might be the proximate trigger,” he said.