There’s a popular perception that housing inventory could surge in the coming years as the Baby Boom generation — those born between 1946 and 1964 — downsizes, trading in larger single-family homes for urban condos.

But two reports suggest that such downsizing has yet to materialize and that it may not happen, at least not to the extent that many have assumed.

The idea behind the downsizing theory is simple enough: It assumes that as the boomers’ children graduate from college and move out, they’ll no longer “have a need for the abundant living space, quality schools, and other amenities typically associated with single-family suburban residency,” writes Patrick Simmons, an economist at Fannie Mae.

And the Fannie analysis of Census Bureau data finds that, sure enough, the boomers are becoming empty-nesters “in droves,” as the proportion of the oldest half of the boomer households that have a married couple with at least one child under age 18 declined to 3% in 2012 from 10% in 2006. The trend holds for younger boomers, too, with the rate dropping to 20% in 2012 from 35% in 2006.

The Fannie analysis also shows a similar trend when it comes to boomers’ participation in the workforce. The share of Boomers who weren’t in the labor force, meaning they were neither working nor looking for work, fell by 9 percentage points, with an even bigger jump for the oldest half of the boomer cohort.

But while their households are shrinking and they are working less, boomers were just as likely to be living in detached single-family housing in 2012, the most recent year for which data is available, as they were in 2006.

Why haven’t boomers downsized? One possibility, Mr. Simmons notes, is that they like their housing. He points to a 2010 survey by the AARP that found 84% of boomers who said they’d prefer to live in their current house for as long as possible.

Another possibility: The scars of the housing bust and the Great Recession have prevented boomers from moving, either because they can’t find buyers for their homes or because they don’t have enough equity to sell and buy the home of their retirement dreams.

The big question is what happens in the coming years, and a second report, from Jed Kolko, chief economist at Trulia Inc., says the U.S. is unlikely to hit a wave of boomer-fueled swaps of single-family homes for urban condo and apartment dwelling anytime soon.

But what if the baby boomers age differently than their recent predecessors? Mr. Kolko finds that the share of households headed by 50- to 69-year-olds rose to 21.3% in 2012 and 21.6% in 2013 after staying in the 19-21% range for the last two decades. This could suggest a shift in preference, though Mr. Kolko says it’s too soon to draw any conclusions. 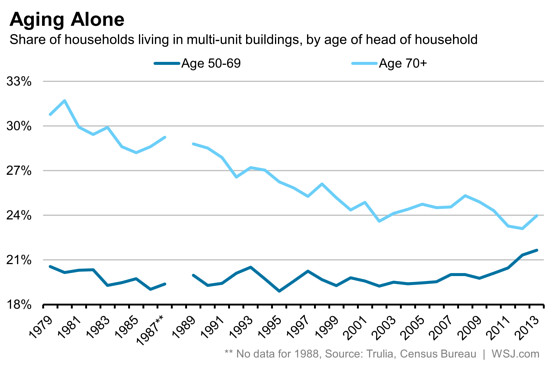 By the same token, the share of households over the age of 69 that has been living in multi-unit buildings has been dropping steadily, from more than 30% in 1980 to less than 25% in recent years. “While the cyclical effect of the recession might hasten downsizing for some boomers, the secular trend means boomers are reaching older adulthood in an era when downsizing is less common and comes later than it used to,” says Mr. Kolko.