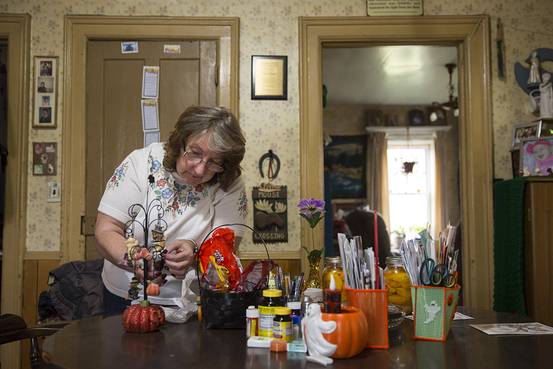 Carol Mead decorates her home for Halloween, in Montrose, Pa., this month. Mead, 67, is retired and her husband, 70, must work at a local rock quarry to close the gap from her Social Security.
BRETT CARLSEN/ASSOCIATED PRESS

When it comes to saving for retirement, there’s a huge gap between what Americans say they want and what they’re doing to make it happen.

A new survey from BlackRock on attitudes about money and financial goals found Americans are holding nearly twice as much cash as they think they ought to in order to reach their retirement goals. Fewer than a quarter of them regularly set aside money into long-term savings or investment plans—yet 74% said they feel financially secure and “prepared to pursue their dreams.”

Baby boomers, who are retiring in droves, face a staggering shortfall. People ages 55 to 64 who responded to the online survey said they expected to have about $45,000 in annual income in retirement. But the amount they had saved would only provide an estimated $9,129—a potential $36,371 gap.

Even affluent retirees—those earning more than $250,000 a year—hadn’t set aside enough to generate the income they said they needed to meet their retirement expectations. 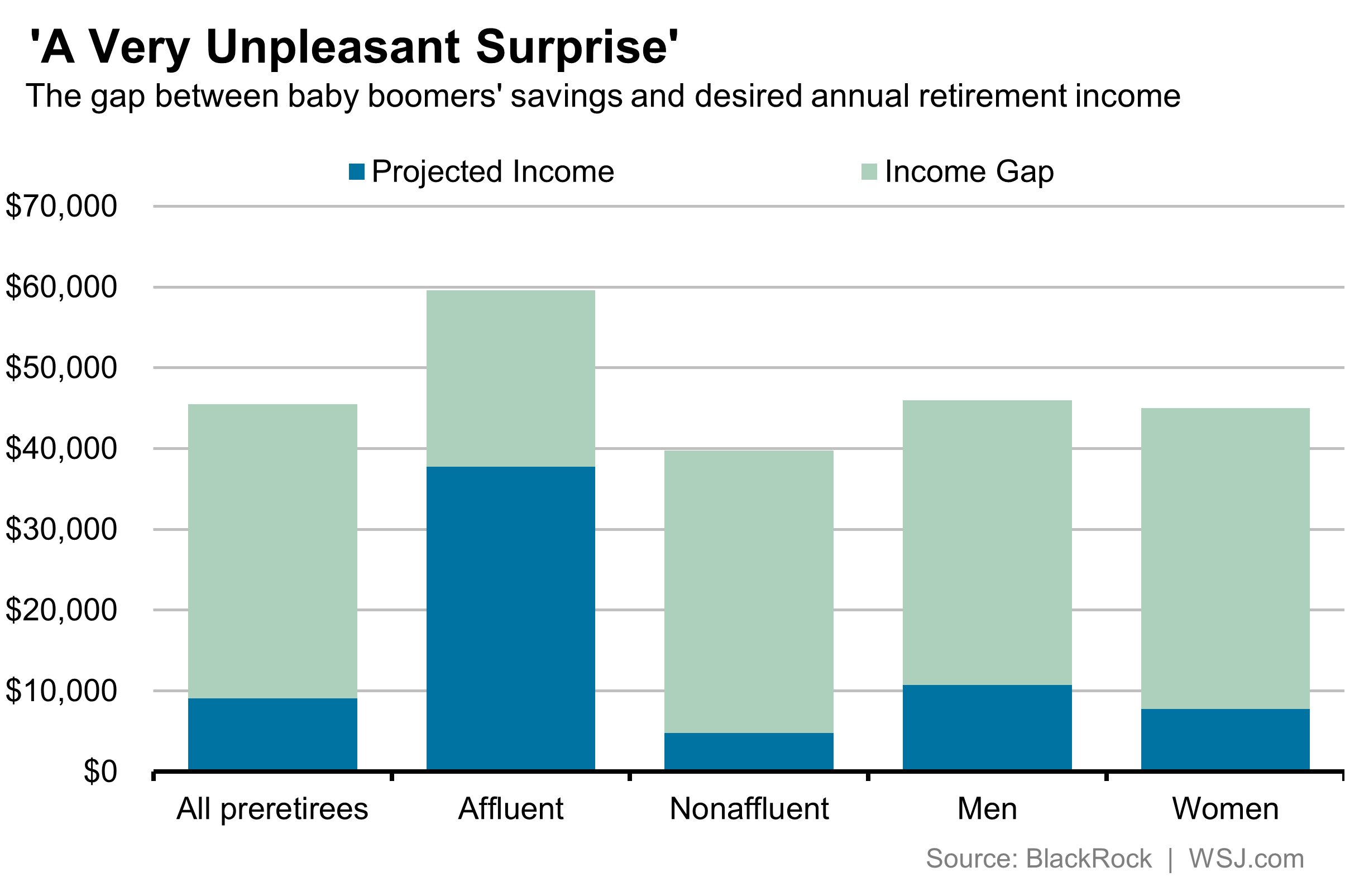 “The amount of money you need to generate a certain level of income is a lot higher than it used to be,” said Russ Koesterich, BlackRock’s global chief investment strategist.

Even if an investor has saved diligently for decades, the amount that a nest egg can generate is much smaller, especially with interest rates so low, Koesterich said. “That’s coming as a very unpleasant surprise,” he added.

The problem is especially acute for younger workers, who will likely spend decades in retirement–much longer than their parents or grandparents. But research has shown Americans are generally bad at guessing how long they’re going to live–in the short term and in the long run. That in turn can affect their financial behavior and investment decisions.

The BlackRock survey, which surveyed 4,213 Americans out of more than 30,000 people around the world, also suggests that the emotional scars of the financial crisis may be holding back some potential U.S. investors.

Nearly four in 10 people surveyed said they want to make sure they have enough cash saved as a security blanket for an emergency before they save for retirement. And the vast majority said they find it difficult to keep up with bills and save for retirement at the same time.

That squares with other recent data from U.S. Financial Diaries, a project of the New York University Financial Access Initiative and Center for Financial Services Innovation, which found many households are saving regularly for small, short-term emergencies, such as an unexpected dip in income or a spike in expenses. But those emergencies happen so often it prevents them from building up larger amounts to put toward long-term goals.

More than a third of respondents in the BlackRock survey also said investing money felt risky, and they were afraid of losing money–even though only 7% said they had actually lost money on a past investment. And a full 72% said they did not see investing as a way to help them reach their financial goals.

Millennials were especially concerned: Nearly half of people ages 25 to 34 agreed that “what you might earn investing isn’t worth the risk of losing your money,” the most of any other generation.

Two out of three agreed that “investing is like gambling.” And despite having decades to save for retirement, 70% of their portfolios are in cash or cashlike investments, according to BlackRock.

In an environment where cash is paying nothing, and bond yields are well below where they were for the past 40 or 50 years, Mr. Koesterich argued younger workers will need to embrace the volatility of the stock market if they want to generate the returns they need to live comfortably for decades in retirement.

The Biggest Reason Workers Don’t Save for Retirement

We’re Living Longer, and Other Reasons to Worry About Americans’ Retirement Outlook

Americans Are Bad at Guessing How Long They’ll Live

The Truth About Retirement for Baby Boomers