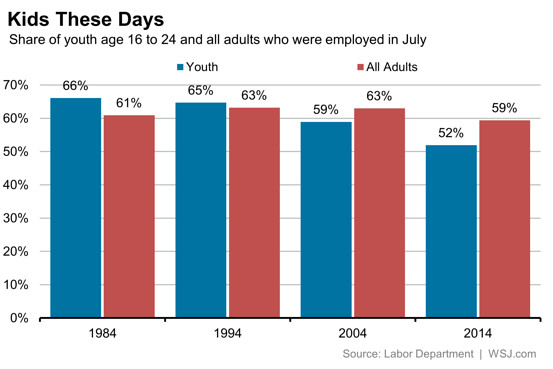 More young people are heeding the old man’s advice: Get a job.

The number of Americans age 16 to 24 who are employed topped 20 million this summer for the first time in six years, the Labor Department said Wednesday. But the share of those in their teens and early 20s with jobs remains historically low, raising concerns about the productivity of the country’s future workforce.

During the second half of last century, it was more common for a young person to have a job during the summer than the typical adult. For example, just 64% of all adults had jobs in July 1989. But since 2000, the fraction of working youth has fallen more swiftly than the overall population.

That could be a concern for future economic gains. With barely half holding summer jobs, many young adults are missing an early opportunity to gain work experience. That means they might not learn the basics about time management, professional behavior and other skills that would boost their chances of landing better-paying jobs down the road, said Donald Grimes, a University of Michigan labor economist.

The trend “is kind of scary,” he said. “There’s a lot of discussion about a long-term slowdown in productivity. Having fewer young people attached to the workforce could be a contributing factor.”

The reasons for a smaller share of young people seeking a job are varied and difficult to pin down.

One possibility: Youth are more frequently opting to volunteer, travel, study and practice sports rather than take traditional seasonal jobs. Another is those who do look for work might be discouraged because employers are hiring older adults for jobs teens formerly held, including landscaping positions and restaurant staff.

Relatively high overall unemployment during the recovery and the steep decline of better-paying manufacturing and construction jobs during the recession have led older adults to take low-pay, low-skilled jobs. Employers might prefer those workers because they are less likely to leave in August to return to school.

Wednesday’s report showed the youth unemployment rate fell in July to 14.3% from 16.3% in 2013. That’s largely because the number of young people with jobs increased 2% from a year earlier to 20.1 million. The jobless rate for youth is much higher than unemployment measures for the broader workforce, but the improvement is in line with an economy that’s been steadily adding jobs over the past year. 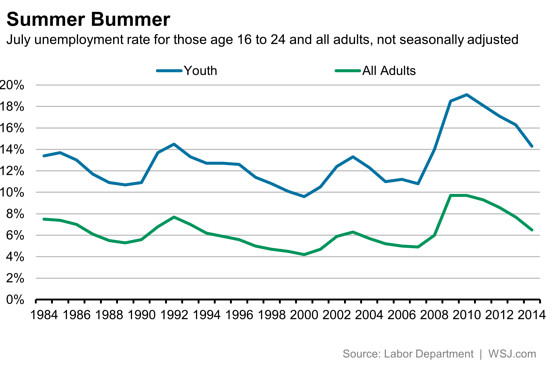