Those hungry for central-bank news shouldn’t expect to hear much from the Bank of England for the next six weeks.

Britons go to the polls May 7 to elect a new government and the BOE is bound by “purdah” rules that prevent officials from speaking in public while the general election campaign is in full swing.

The clock starts ticking March 30, with the dissolution of Parliament, and runs at least until May 11, the first Monday after the poll. 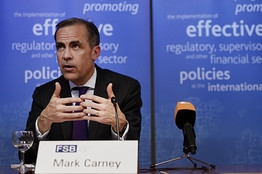 Mark Carney, governor of the Bank of England and chairman of the Financial Stability Board
BLOOMBERG

During that period, there will be no speeches by BOE Gov. Mark Carney or any other official on the rate-setting Monetary Policy Committee; the Financial Policy Committee, which safeguards the financial system; or the Prudential Regulation Authority, the BOE’s bank-regulation unit. Officials won’t give any interviews to the media either.

The routine business of the central bank carries on, however. Monthly figures on money, lending and other data are released as usual. The MPC will make its regular monthly decision on interest rates and other policies a few days later in the month than usual, on May 11.

The purdah rules are designed to preserve the political impartiality of the U.K. civil service, the army of officials that keep of the machinery of state functioning. The BOE, as the U.K.’s central bank, is a “non-departmental public body” in civil-service jargon, and is therefore covered by the same rules.

British elections have historically produced a clear winner and the business of government quickly resumes after the poll. But this year is different–opinion polls suggest parliament could be “hung,” meaning no one party commands a majority and may have to negotiate with smaller rivals to form an administration. A similar outcome occurred in 2010.

If that happens, the BOE’s purdah period may be extended beyond May 11 while politicians thrash out a deal.