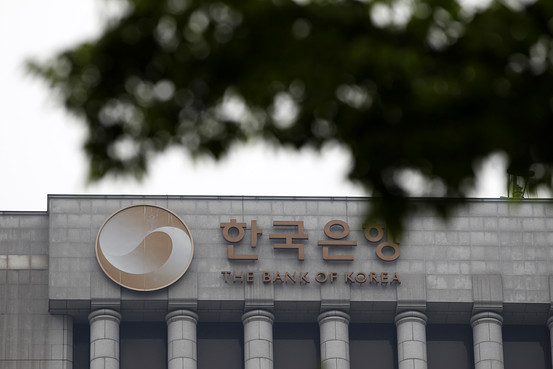 All of sudden, economists are speculating about a Bank of Korea rate cut.

The BOK kept its policy rate on hold for a 14th straight month on Thursday, but what set central bank watchers buzzing was news that it was the first non-unanimous vote on the policy board vote over that same period.

Soon after telling the press that one board member had dissented from the majority view, Governor Lee Ju-yeol announced cuts to the BOK’s growth forecasts and warned of “greater downside risk to growth.”

Nomura economist Kwon Young-sun is one of those who now think the central bank’s next move for its base rate might be down, rather than up, as most have assumed for some time. While the identity of the dissenting board member won’t be known until minutes of the meeting are released in two weeks, that person is widely thought to have called for a rate cut.

“This is suggestive of a rate cut at the August policy meeting,” Mr. Kwon said, adding that the BOK has turned “very dovish.” Mr. Kwon previously predicted a rate hike in December or next year.

ANZ analysts said in a note the BOK is facing pressure to ease its monetary policy further as the incoming finance minister Choi Kyung-hwan is seen as supportive of steps to boost growth.

HSBC economist Ronald Man also took the split on the board as a surprise that suggests shifting views but has a more cautious stance.

“Upcoming economic data will need to disappoint further to prompt a policy rate cut,” said Mr. Man, who maintained his earlier view that the next move will be a rate hike in the first quarter next year.

The BOK’s divided decision as well as the downgrade to the growth forecasts prompted Barclays to push back its timing for a rate hike by two quarters to the first quarter of 2015.

The BOK lowered its forecast for gross domestic product growth to 3.8% for 2014 and 4% for 2015 from its April projections of 4% and 4.2%, respectively. It blamed a weaker-than-expected recovery after April’s ferry sinking.

Adding to the speculation of a possible rate cut, at his press conference, BOK Gov. Lee backpedaled from earlier comments indicating the next rate move would be a hike.

“In April, three months ago, I meant to say that with 4% growth, the long-term rate move should be up– which was not a signal for raising rates,” he said.