MOSCOW–The Bank of Russia cut interest rates Friday for the fifth time this year citing economic risks, but declined to commit on whether there would be further monetary easing.

The central bank slashed the key rate by 50 basis points to 11%, in line with the market consensus, taking its total cuts so far this year to six percentage points. 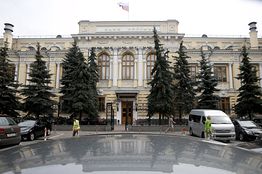 People walk in front of the central bank headquarters in Moscow.
Maxim Zmeyev/Reuters

Still, the key rate remains above the 10.5% level it reached in early December, before an emergency increase to 17% that helped to stabilize the plummeting ruble.

The Bank of Russia is trying to tame stubbornly high inflation without sending the economy into a deeper recession.

Earlier this week, the central bank suspended daily purchases of dollars and euros for its reserves, as the ruble dropped to its weakest levels since March.

The ruble weakened following the rate move to 60.51 versus the dollar from levels of 60.3 seen before the monetary decision.