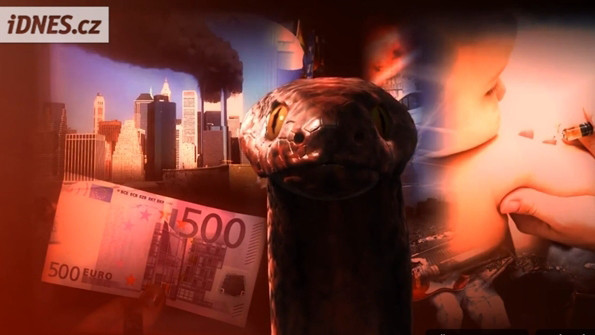 THE recent decision by Czech state television to ban the campaign advertisement of a Eurosceptic party for the European Parliamentary elections highlights a question relevant across the continent: at what point does anti-Brussels rhetoric cross a line?

In the offending ad, a digitally animated snake slithers in front of a variety of images, including a Star of David, smiling rabbis, a vaccination, a €500 note and smoke pouring from New York’s Twin Towers. The serpent is eventually slain by a knight holding a shield that bears a fork-tailed lion crest, the Czech national symbol. Czech Television refused to air the advertisement. Adam Bartoš, the leader and top European Parliament candidate for the “No to Brussels-National Democracy” party, admits the ad is “provocative.” He insists it is anti-Zionist, not anti-Semitic, though this fails to explain why Mr Bartoš has also taken to publishing lists on the internet of Czech elites he claims are Jewish. The snake in the ad, Bartoš said, symbolises Brussels. “Our party is dangerous for the establishment because it defends what other parties do not defend—a family and a nation.”

Europe-wide forecasts predict that significant numbers of Eurosceptics will make it into the European Parliament (EP) after voters go to the polls later this month. Some predictions have this motley crew taking up to 30% of seats. In the Czech Republic, Euroscepticism has long been part of mainstream politics, perhaps most clearly embodied in Václav Klaus, the former president. Mr Klaus has previously expressed his admiration for Mr Bartoš, a fairly well-known journalist in a former life. But recent events have seen Mr Klaus issue a statement strongly distancing himself from this new party and its leader. Their message, it seems, is too radical for one of Brussels’ most notable sceptics.

The overall EP campaign in the Czech Republic has an anti-EU tone. Even the pro-Brussels Social Democrats are structuring their message as a rejection of the Europe-wide push for austerity. Mr Klaus’s former party, the Civic Democrats, are circulating a petition amongst political leaders to swear off adopting the euro currency. Usvít, a populist party in the national parliament that political analyst Jiří Pehe has called “proto-fascist”, is campaigning to block the country’s borders to Roma people. (Usvít’s chairman notably once ran a travel agency for stuffed animals, so one assumes Schengen rights for soft toys will still apply.)

As can be deduced from the party’s name, No to Brussels-National Democracy advocates the Czech Republic leaving the EU. “The time of building a United States of Europe is over,” Mr Bartoš said. “It was the dream of free masons and proud social engineers, but not the dream of common people.”

State broadcasters are obliged to air ads of any party officially on the ballot. In EP elections, voters’ penchant for sending people to Brussels and Strasbourg that they wouldn’t want in their own back garden tests this rule and can conflict with laws that ban inciting hatred. In the Czech Republic, during the 2009 EP elections, one openly racist advertisement reached airwaves before state radio and television pulled it and outlawed all advertisements submitted by two far-right parties. Among their lowlights: Advocating “a final solution to the Gypsy question” and the joke, “Do you know what the most frightening thing a Gypsy might say to you is? Good morning, neighbour.” Neither party reached the EP.

The Roma minority are a convenient scapegoat for much of the right wing in Central and Eastern Europe, but Mr Bartoš and his party say little of the Roma. They are however against “Zionism, multiculturalism, homosexuality, free masons, banks, the new world order agenda and so on,” says Mr Bartoš. They favour recent policy towards Ukraine; Russian policy that is. “We support Mr. Putin’s responses and with understanding accept the will of people in Crimea to join the Russian Federation,” Mr Bartoš said. “It was a free referendum, not like the referendums in EU.”

Czech voters will give their opinion on No to Brussels-National Democracy and 28 other parties on May 23rd and 24th. Although Mr Bartoš and his party appear long shots to reach the EP, they are positioning themselves rather well to run in the local elections this fall.