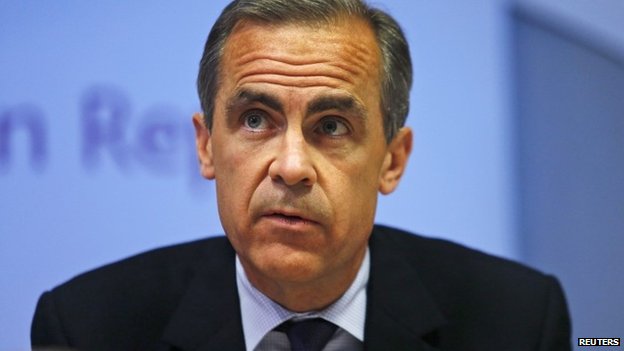 The governor of the Bank of England has given his strongest warning yet about the dangers to Britain’s economy posed by the booming housing market.

Mark Carney says the market represents the “biggest risk” to financial stability and the long-term recovery.

He adds that there are deep structural problems which need to be addressed.

In an interview to be shown later on the Murnaghan show on Sky News, he says the housing market has the potential to threaten the long-term recovery.

He says the Bank of England is “closely watching” rising property prices and the subsequent increase in large-value mortgages, which he warned could lead to a “debt overhang” which could destabilise the economy.

There are not sufficient houses built in the UK”

Mr Carney will say: “When we look at domestic risk, the biggest risk to financial stability and therefore to the durability of the expansion [of the economy] those risks centre in the housing market.”

Mr Carney says the fundamental problem was a shortage of homes – and the Bank of England had no solution to that.

Instead, he says it will ensure banks have enough capital to withstand the risks of lending, and check lending procedures to ensure mortgages were given only to those who could afford them.

“What we can influence is whether the banks are strong enough. Do they have enough capital against risks in the housing market, whether underwriting standards are tough enough so that people can get mortgages if they can afford them?

“And by reinforcing both of those we can reduce the risks that come from a housing market that has deep, deep structural problems.

The Nationwide Building Society has said annual house price growth in the UK rose by 10.9% in the year to April – the highest inflation rate for seven years.

The year-on-year comparison is calculated slightly differently by the two lenders.

The Halifax compares the previous three months with the same three months a year earlier to give a smoother comparison, rather than a direct comparison of the equivalent months as calculated by the Nationwide.

Sir Jon Cunliffe, one of the Bank of England’s deputy governors, previously said it would be “dangerous to ignore the momentum that has built up in the housing market”.

David Blanchflower, a former member of the Bank’s rate-setting Monetary Policy Committee, agreed the boom was “a threat to stability”.

“The Bank is going to have to step in because, ultimately, if the house prices don’t slow they’re going to have to raise rates and that would be very harmful,” he told BBC Radio 5 live’s Sunday Breakfast.

“It will increase the value of the pound, it’ll reduce dividends, it will raise unemployment and it’ll kill the house price off and put people into negative equity so that’s really a big concern.

“It’s a balance that Mark Carney’s got to walk and that’s why he says it’s such a big threat.”

Housing Minister Kris Hopkins said: “In 2010 we inherited a broken housing market, but our efforts to fix it are working.

“We’ve also helped homebuyers get on the housing ladder, because if people can buy homes builders will build them.

“Housebuilding is now at its highest level since 2007 and climbing. Last year councils gave permission for almost 200,000 new homes under the locally-led planning system and more than 1,000 communities have swiftly taken up neighbourhood planning.