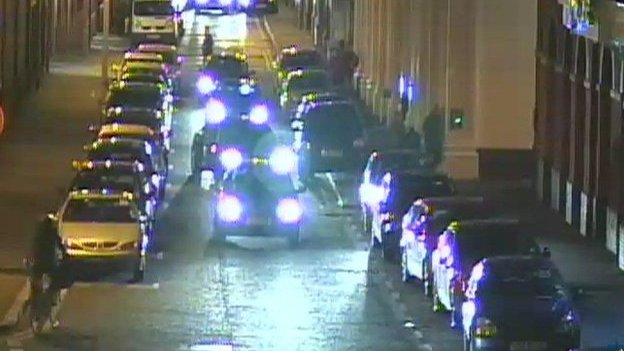 The cyclist, in the bottom left of the picture, on Talbot Street

A cyclist carried a bomb into Belfast’s Cathedral Quarter in December in a holdall on his handlebars, police have said.

The small device detonated as police were clearing the area. No-one was injured, but it caused severe disruption on a busy Friday night.

A pressure cooker was used as part of the device, police have confirmed.

They have issued a description of a man on the bicycle they believe left the bomb on 13 December.

They have also released CCTV images of him on Talbot Street and in St Anne’s Square.

Detective Inspector Chris Wilson, from Serious Crime Branch, said: “These images were taken at 5.46pm when the area was busy. In Talbot Street, the cyclist actually moves in the opposite direction to the traffic. In St Anne’s Square the holdall is visible beside the bike’s handlebars.

“Our inquiries are progressing. We have established that a pressure cooker was used as part of the device. The attack ruined a night out for hundreds of people but it had the potential to injure or kill.

“I am appealing to anyone who was in the Cathedral Quarter around 5.45pm and saw a man on a bike wearing a black hoody and carrying a black Slazenger holdall to contact the police.

“Anything you saw or heard may be of assistance. Or if you know anything about the attack or the cyclist, please contact us.”

The bomb exploded at Exchange Street West at about 18:45 GMT as the area was being cleared. 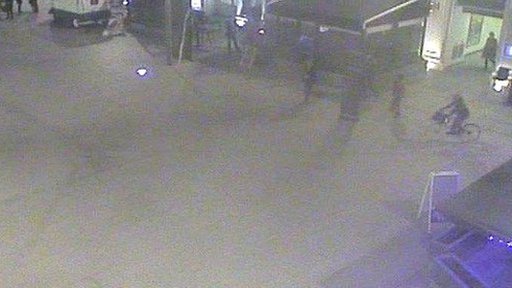 The suspect, on the right of this picture, was also seen in St Anne’s Square

A warning had been phoned to a newspaper, but police said the bomb had been left in a different place.

About 1,000 people were affected by the alert in the Cathedral Quarter, which is one of the main entertainment venues in Belfast, home to a number of bars and restaurants.