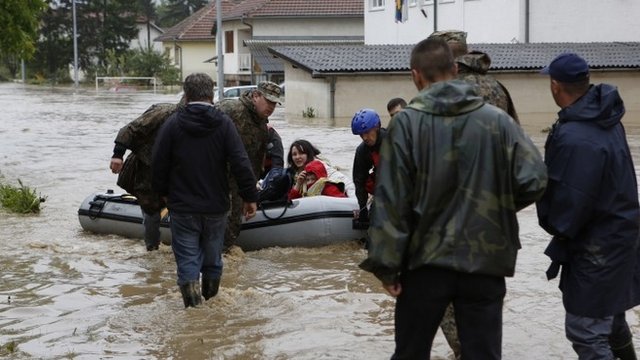 More than two dozen people are feared dead in Bosnia-Hercegovina and Serbia after the worst floods in more than a century.

Tens of thousands have fled their homes as several months of rain fell in a few days and rivers burst their banks. Landslides have buried houses.

In one Bosnian town alone, Doboj, the mayor said more than 20 bodies had been taken to the mortuary.

In Serbia, an outer suburb of the capital Belgrade has been inundated.

“More than 20 corpses have so far been brought to the city’s morgue,” the mayor of Doboj, in the north-east, was quoted as saying.

The republic’s police chief, Gojko Vasic, said the situation had been particularly difficult in Doboj “because the flood waters acted as a tsunami, three to four metres high. No-one could have resisted.” 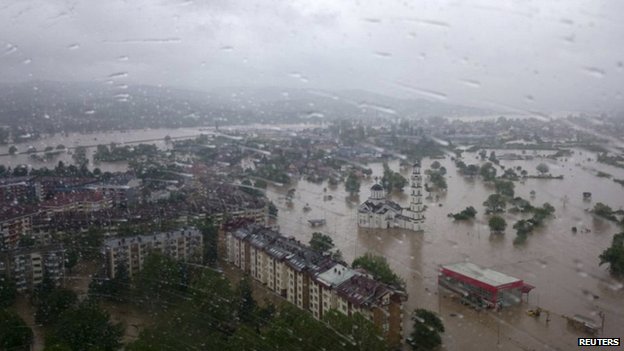 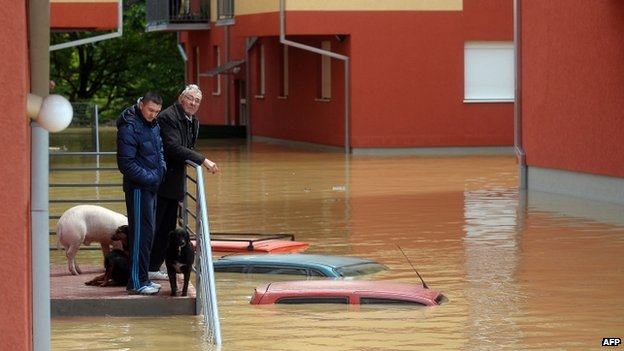 People wait to be evacuated from their flooded homes in Obrenovac, 40km from Belgrade 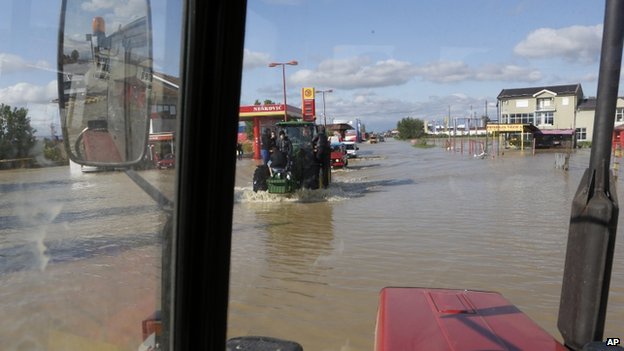 Tractors, boats and other forms of transport are being used to take people to safety 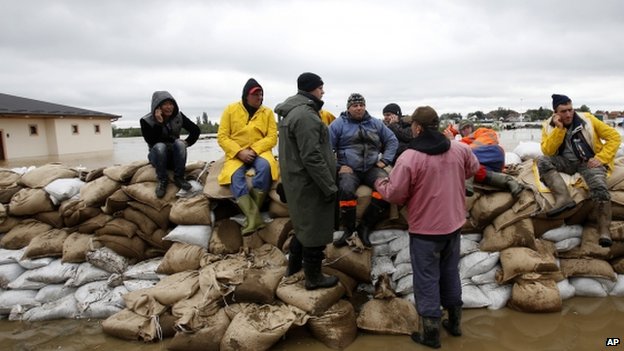 Flood defences have gone up along the Sava river, as people brace for a fresh surge of floodwater

Observed from the air, almost a third of Bosnia, mostly its north-east corner, resembled a huge muddy lake, with houses, roads and rail lines submerged, the Associated Press reports.

According to a spokesman for Bosnia’s Security Ministry, about a million people – more than a quarter of the country’s population – live in the affected area.

One of the worst-hit areas in Bosnia is the eastern town of Bijeljina where rescue teams are trying to transport 10,000 people to safety.

In Serbia, eight people were reported to have drowned.

Flash floods woke my uncle at around 0330 so they went up to the first floor. Then they had to go to the third floor because all lower floors were flooded”

Prime Minister Aleksandar Vucic told reporters the first bodies had been recovered in Obrenovac, the worst-hit area to the south-west of the capital, and he feared more would be found.

But he said the number of deaths would not be made public until the waters had receded.

A new flood surge was expected on the Sava river late on Sunday, he said.

In some areas, flood waters reached the second floor of people’s homes.

“The flash floods woke my uncle at around 0330 so they went up to the first floor. Then they had to go to the third floor because all lower floors were flooded,” one resident from Obrenovac said.

Rescue workers have been working to bring thousands of stranded residents to safety and officials have also ordered the evacuation of another town, Baric, closer to Belgrade.

The Sava river has risen particularly high in the western town of Sabac, and volunteers have tried to shore up flood defences there.

Rescue co-ordinator Predrag Maric appealed for food, water, and clothing to help those in need.