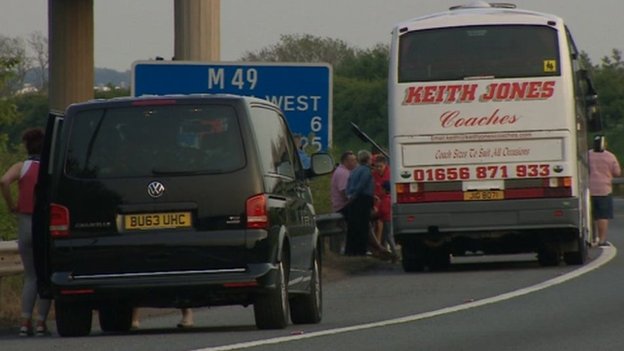 A 13-year-old boy from a Welsh rugby club has a “significant head injury” after falling from a moving coach near Bristol.

The accident happened as the coach was on a roundabout at the junction of the M4 and M49 motorways at 19:00 BST.

It is believed the boy fell out of the emergency door while the coach was on the roundabout.

An ambulance service critical care team attended and the boy has been taken to Bristol Children’s Hospital.

Part of the M49 has been closed off.

The boy was with from the Tondu under-13s rugby team from Bridgend, south Wales.

Ken James, whose grandson was also on the coach, said a car stopped inches from the injured boy on the road.

“The police are there and the ambulance has taken him to hospital.

“They are all in a big jam at the moment but we’ve been told there is another bus going to get them,” he said earlier.

Tony Fox, who is a member of the Tondu committee, said officials were waiting for news.

The coach involved belongs to Keith Jones coaches based in Bridgend.