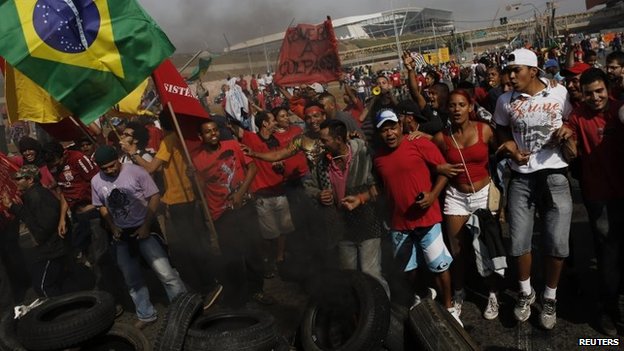 Demonstrators protesting against the spending on the football World Cup have blocked a number of key roads in the Brazilian city of Sao Paulo.

They burned tyres and caused disruption during rush-hour traffic.

Activists have called a day of protests in 50 cities across Brazil.

The scale of the demonstrations is expected to give an indication of the security challenges the government may face during the football tournament, which kicks off on 12 June.

The protesters say they want the government to spend billions of dollars on social projects, transport and housing, instead of the World Cup.

One of the biggest protests in Sao Paulo took place in the city’s Itaquera district near the Arena Corinthians stadium, one of the venues for the tournament.

Protesters there demanded housing, and not stadiums, be built in accordance with Fifa standards, in reference to world football’s governing body.

“Our goal is symbolic,” said Guilherme Boulos, the head of Homeless Workers Movement.

“We don’t want to destroy or damage the stadium. What we want is more rights for workers to have access to housing and to show the effects the Cup has brought to the poor.”

BBC Brasil’s Gary Duffy, in Sao Paulo, reports that among the demonstrators are groups that have occupied land or buildings after being forced from their homes by high rents. 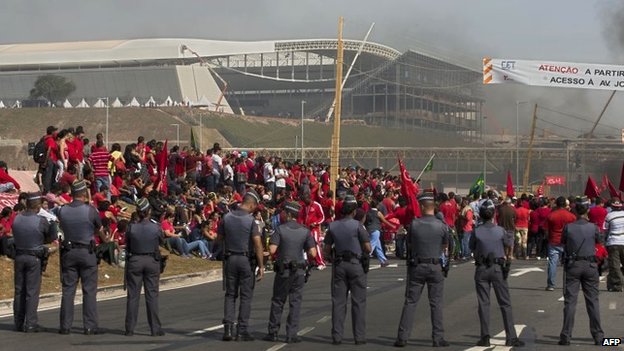 One of the protests was held near the Arena Corinthians stadium, one of the World Cup venues

The government has tried to downplay the scale of Thursday’s unrest, arguing it was not related to the World Cup.

“From what I’ve seen, these are specific claims by workers. I’ve seen nothing that is related to the (World) Cup,” Brazilian Sports Minister Aldo Rebelo said.

“There’s no reason to panic ahead of receiving three million Brazilian tourists and 600,000 foreign tourists (for the tournament).” 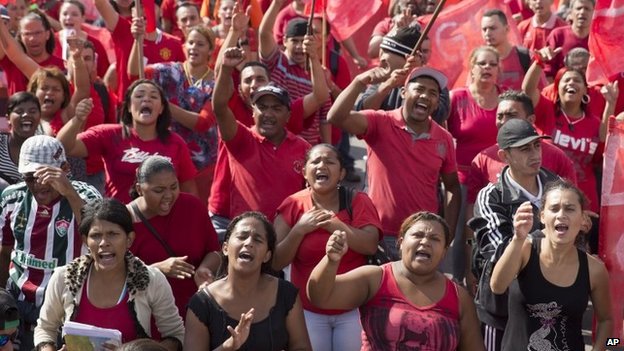 The government urged people “not to panic”, saying the protests were not related to the World Cup

The planned protests coincide with a range of strikes, including by the police force in the north-eastern state of Pernambuco.

The army has been deployed there to provide additional support after some looting.

Recent protests in Brazil have been much smaller than those which took place in June last year in various cities.

More than a million people took to the street then over poor public services, corruption and the high cost of hosting the World Cup.

The BBC’s Julia Carneiro in Rio de Janeiro – where protests are planned later in the day – says that, for now, there is no suggestion that they will happen in the scale they did last year.

The wave of protests prompted Brazilian President Dilma Rousseff to propose a referendum on political reform.

She also pledged to invest 50 billion reais ($25bn, £16bn) in public transport, one of the protesters’ main grievances.