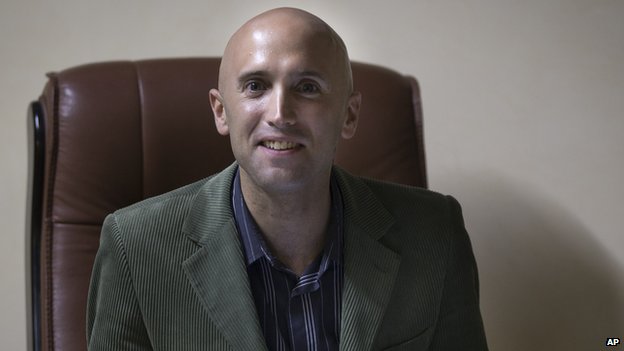 Graham Phillips has thanked people for their messages of support

A British national detained in Ukraine has said he is “free and fine”.

Graham Phillips, a journalist working for TV station Russia Today, tweeted his followers to say he had been released and was not being charged or deported.

The 35-year-old had been detained in Mariupol, eastern Ukraine, on Tuesday.

Mr Phillips, who said he had been treated fairly, thanked the British Embassy and everyone else who had supported him.

All my work in order, no charges, no deportation, no one laid a hand on me in anger.”

Russia Today reported that Mr Phillips had been released to the British Embassy in Kiev.

The Ukrainian Defence Ministry told the Russian station that Mr Phillips had been detained for “filming facilities which are forbidden from being filmed”.

Mr Phillips, who grew up in Nottingham before moving to Scotland, works as a freelance journalist and is a stringer for Russia Today.

In a series of tweets on Wednesday evening, Mr Phillips said: “I’ve just recently been released after being detained by Ukrainian authorities at #Mariupol yesterday.

“Was then transferred to Zaporozhye where I stayed the night, under armed guard. Removed by armed guard today, questioned thoroughly on my work for @RT_com (Russia Today).

“All my work in order, no charges, no deportation, no one laid a hand on me in anger, Ukrainian authorities treated me fairly. All ok.”

He said he did not have his phone or possessions but hoped to get them back on Thursday.

The journalist wrote: “As for comments I was ‘holding a firearm’.

“Was holding my Canon camera, filming, just like I always do. Tomorrow will see if files still there.”

Mr Phillips added that the Ukraine authorities were not “happy” he worked for Russia Today but accepted it.

He wrote: “Support means a lot to me, I expressed all my views to Ukrainian authorities, as stated.

“They disagreed with some, but I’m free and fine.”

He also called for the immediate release of two journalists for Russian TV channel LifeNews who are believed to be being held in Kiev.