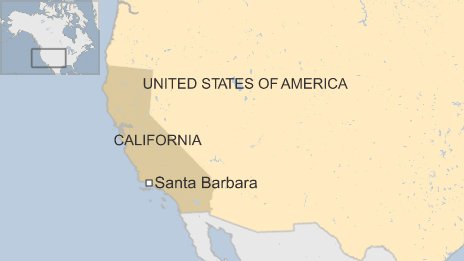 A series of drive-by shootings in the Californian city of Santa Barbara has left seven people dead, US police say.

The shootings took place on Friday night in the Isla Vista neighbourhood, next to the University of California-Santa Barbara, where two-thirds of the residents are students.

Seven people were also injured. The suspected gunman is among the dead.

University officials and the police issued alerts calling on people in the area to stay indoors.

“We have obtained and are currently analysing videotaped evidence that suggests that this atrocity was a premeditated mass murder,” he told a news conference.

He indicated to local media that police were familiar with a YouTube video entitled Elliot Rodger’s Retribution, which shows a young man complaining about years of rejection by women.

Witness Michael Vitek told CBS television: “There was a BMW rolling by and I think there was two people inside. One of them was shooting at people. I think one girl was shot dead.”

Are you in the area? Did you witness the shootings? You can send us your comments by emailing haveyoursay@bbc.co.uk using the subject line “Santa Barbara”.